This year Sonja Frisell's beloved production of Aida returns with a starry cast. The Production
The current production at the Met opened back in the 80s replacing a planned production by Franco Zeffirelli because Zefirelli's was supposed to be too big and threatened to "break the bank". The sets by Gianni Quaranta evoke the splendor of Ancient Egypt: detailed, evocative and on a colossal scale. For example, the Triumphal March of Act II is brilliantly lit, with onstage trumpets, horses, near-endless formations of troops, war booty, wagon loads of corpses, prisoners and much, much more. The Cast
Violetta Urmana returns to the title role which was recorded live in HD and this month will be released on DVD (For more information see the DVD and CD releases of July). Two years ago she sang the role to mixed reviews. The New York Times called her performance "breathtaking" while Opera Britannica stated that Urmana's "voice rarely cuts through Verdi's heaviest orchestration."  I for one saw the opening night of this run and enjoyed her performance. While her voice can be shrill at times and her high notes unsteady, her musicality is like no other. She is probably one of the best musicians in the business today adding dramatic power and beautiful phrases to the music. Her voice is not the most beautiful but it transmits the suffering of Aida. I would not rank her amongst the greatest of all time by any means, but she is definitely one of the best Aidas at the moment.

Marcelo Alvarez returns to the Met in a new Verdi role, Radames, which he debuted in London a year ago. Reviews for this Radames were mixed. The Musical Criticism stated that he "sang beautifully throughout" while the Classical Source stated that he "sounded taxed and that he lacks the trumpet-like tonal quality one would wish for at the soldier’s more heroic and desperate passage."  After lasts seasons run of Il Trovatore I wonder if he will survive this run of Aida. Critics stated that his singing did not “sound entirely comfortable.” In last season’s Trovatore, Alvarez sounded tired and his voice lacked power, weight, and high notes. Every time he had to reach for high notes he did his best Franco Corelli impression, but the results were unpleasant to say the least. His breath control was atrocious and as result he could not phrase. He seemed to find the need to place an odd accent in his phrase as a means of support and I never did hear him shift comfortably through the passagio into his high notes.  This was best displayed in his aria “Ah si ben mio.” With Radames, Alvarez enters more dramatic territory which needs even more power and weight in the voice. Breath control is necessary and phrasing is crucial, especially in his aria “Celeste Aida” which requires him to sing at the beginning of the opera with no warmup. The addition of these Verdi roles suggests Alvarez wants to enter into heavier repertoire such as Otello, which he previewed in his last Solo recital album "Verdi Arias." The problem with this is that Alvarez is not a true spinto tenor. He is naturally a lyric tenor (his Rodolfo in "La Boheme" in Japan was much better suited to his voice).  He artificially darkens his voice to achieve the spinto color and has progressively damaged every aspect of his voice. I am rather tentative about his success with Radames at the Met. 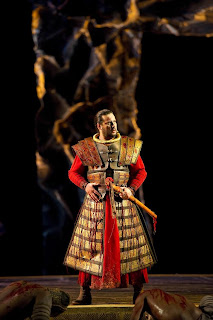 Stephanie Blythe returns to the Met after an exceptional Fricka. She sings her first Amneris at the Met and she may steal the show from the two principals. Her voice is huge and powerful. While she is not the greatest actor, her voice is so gripping that it is impossible to take your eyes off of her. She expresses every emotion in the music and she phrases like no other mezzo around today. My only concern is that a few years ago I heard her sing a disappointing Azucena with suspect breath control and her spotty intonation. However, the Ulrica I heard from the Chicago Opera was outstanding. In addition, a few years ago she previewed the role of Amneris at the 40th Anniversary Gala where she sang the duet between Aida and Amneris alongside Maria Guleghina. Her voice soared with intensity. Blythe has the tendency to astonish and mesmerize, so I will hold off any precautions.

Lado Ataneli sings Amonasro. While his voice is not as good as the great baritones of the 70s and 80s, he is one of the few remaining Verdi baritones. Having already seen him in the role of Amonasro in 2005, I can attest that his voice is not that big. However, it does have a good ring and good high notes. His breath control needs a little work however. Last season he sang Rigoletto and lacked the emotional power and vocal strength. As I stated in my Tosca preview, James Morris is no longer in the prime of his career. His voice is weaker and a little wobbly. However, he still sings with great power and still has great stage presence. Ramfis is not a huge role, but it is crucial. Morris is not known for his Verdi repertoire but when he takes one on, it turns into glorious singing. This is best displayed in the Met performance of Otello with Placido Domingo and Renee Fleming. With Morris’s presence, Ramfis will most likely be a standout role. Conclusion:
It’s a shame that the two principals are the weakest in the cast. Still with a cast as strong as this one, this should prove to be an exciting run at the Met.
Posted by Unknown at 8:08 PM