The Yellow label announced the DVD for the Met's Eugene Onegin yesterday on Youtube posting two videos from the performance. The company secretly added the videos did not appear on their facebook page or on the companies website. However based on these two videos the company is getting ready to launch the DVD in the company months.

The Met press office, “Erin Morley will sing the role of Sophie in all performances of Strauss’s Der Rosenkavalier this season [starting 72 hours from now!], replacing Mojca Erdmann, who is still recovering from a recent case of pneumonia.”
Posted by Unknown at 8:39 AM No comments:

After a number of days without a Manrico at the Berlin State Opera, the company has announced that Gaston Rivero will sing the role. Daniel Barenboim scrambled for a tenor to sing the title role and with all the big superstars busy, Rivero was the only singer available. We wish him good luck!
Posted by Unknown at 6:07 AM No comments:

Everyone has been anticipating the debut of Anna Netrebko Netrebko's Leonora at the Berlin State Opera. The cast was perfect with Placido Domingo and Aleksandrs Antonenko. Now it is being reported that Antonenko has cancelled the lead role of Manrico. The production is currently rehearsing with no Manrico and with a star studded cast and sold out shows Berlin is posed to find a star of the same measure as Antonenko.

Rumor mill says that Jonas Kaufmann is currently front-runner but with his busy schedule it is unlikely. Other blogs mention Francesco Meli while others say Ramon Vargas. The question is who will fill the spot and will it be a newcomer.

Update: Francesco Meli is unlikely to Sing as he will be premiering a new production of Ernani at the Teatro Roma with Riccardo Muti

Ramon Vargas Never added that role to his repertoire and Marcelo Alvarez is in Tokyo singing Tosca
Posted by Unknown at 10:08 AM 1 comment:

Over the past few days a number of announcements have been made regarding future seasons at the Met and all over the world. Here is a an overview. 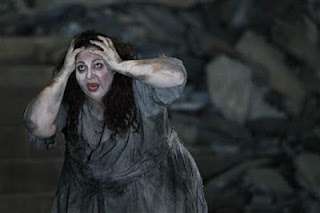 Christine Goerke will sing Brundhilde at the Met in 2018-19. The announcement was made in the New York Times and although it is exciting news it would have been better to stage this earlier now that the soprano is her prime.

Roberto Alagna will sing Otello and Cyrano de Bergerac. Alagna announced that he is doing Otello next summer in Europe and while that does not surprise anyone, is he really up for the challenge of the daunting role. Most importantly does he have the voice because he has the acting skills. He also announced that he will do Cyrano at the Met with Patricia Racette.


Anna Netrebko has recently announced that she is singing Il Trovatore at the Mariinsky theater in December and at the Met in 2015 with Yonghoon Lee.

Posted by Unknown at 8:01 AM No comments:

Two years ago I posted an article on performances that never obtained a DVD release and that should. These performances were a number of historical telecasts starring some of the best from the past. Out of the list only one was released, the Andrea Chenier from the Met with Pavarotti and Maria Guleghina. However the rest are still on a shelf collecting dust. Some of them have been added to the Met opera on Demand but the rest are either on Youtube or not available. The following is a list of recent performances that have made history or that are exceptional but have been ignored by distributors.

The run for the new production of Les Vêpres Siciliennes in London has ended and Erwin Schrott has kindly put up some videos from the HD. The videos include the aria "O tuo Palermo" in French and the trio in act 5. The opera is one of Verdi's least popular but it is always a pleasure to hear it sung in major theaters.

Here are the videos

Tosca in HD This Weekend

This weekend Tosca will  be screened Live in HD for the second time. The production by Luc Bondy is one of the most controversial productions at the Met as it premiered to a number of boos in 2009 at the Opening Night of the season. The Met has presented the production four straight seasons and has failed to sell out the house.

This season Patricia Racette will bring her acclaimed portrait of the diva. However Racette's voice has declined in the past years since she first sang it in 2010. The voice struggles to get to the top of the range and she sounds uncomfortable. Roberto Alagna sings Cavaradossi and critics have praised him for his ardor. However Alagna struggles with most of the role except his arias and has a hollow sound. As Scarpia George Gagnidze brings his chaotic voice to the role which he sang at the premiere of the production. His Scarpia is one dimensional and he has failed to add any layers to the role.
\
With all these elements it seems this HD will be one of the biggest disappointments of the season. Additionally it seems like it will be a waste of time considering such operas as Di Frau Ohne Schatten, Arabella, Die Fledermaus, and Norma were ignored.

As Opera fans which HD would you guys have liked to see instead of Tosca? Who is Going to see this Work?
Posted by Unknown at 9:03 PM 3 comments:

The Salzburg Festival has announced their lineup for the summer. Many of the rumors have been confirmed including Anna Netrebko and Placido Domingo joining forces for a new production of "Il Trovatore." One of the other highlights will be Juan Diego Florez and Elina Garanca singing a concert a performance of "La Favorita."  Waltraud Meier and Peter Seiffert will also join forces with Rene Pape and Ekaterina Gubanova for an abridged concert performance of "Tristan und Isolde." Cecilia Bartoli is also taking on La Cenrentola while Ildebrando d'Arcangelo will sing his acclaimed interpretation of "Don Giovanni.

Continue Reading »
Posted by Unknown at 7:48 AM No comments: