Here are the first LaBoheme pictures from Salzburg. The productio opens August 1 and will broadcast on ZDF, ORF and NHK
Enjoy! 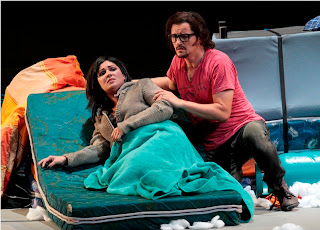 Continue Reading »
Posted by David Salazar at 3:35 PM No comments:

The Production
Richard Eyre's winning production returns to the Met after two successful runs. The production which premiered in 2009 brought a new and refreshing look to the work which had been plagued with two bland productions in a row. Set in the Franco period, Richard Eyre chose to use a rotating turntable to move the action forward. The turntable easily changes into a town square, a tavern where gypsies mingle, the smugglers hideout and the area outside the bullring. The sets are brought to life by ominous bricks and the lighting design. Eyre also brings a new element to the work using three choreographed dances during the preludes and interludes of each act. These dances depict the tumultuous relationship of Carmen and Don Jose. Some of the other memorable aspects of the production is the dance that starts the second act where Eyre brings together a Flamenco choreograph inspired by Carlo's Saura's movie "Carmen" and  the reveal of the bullring at the end as the Toreador kills the bull emphasizing Carmen and Don Jose's relationship being similar to that of a bullfight. Bringing this production back should be a real treat especially with a brand new cast.

Continue Reading »
Posted by Unknown at 8:45 AM No comments:

Zelmira will finally come out!

Juan Diego Florez's long delayed Zelmira will finally be released by DECCA who has not released a DVD or CD of Florez's since 2010. The cast also includes Kate Aldrich, Geregory Kunde and is conducted by Roberto Abbado. More details coming soon.

The cast of La Boheme from Salzburg

Here is the first picture of La Boheme from Salzburg in rehearsals with the whole cast.


Opera magazine has just released a slew of rumors regarding the furture of the Met and the Royal Opera House. Here is a look.....

Notable DVD and CD releases for the Month of July

This month a slew of DVDs are released from the greatest theaters in the world.

The featured DVD of the month is from the Royal Opera House. Il Trittico conducted by Antonio Pappano stars Eva Maria Westbroek, Lucio Gallo, Aleksandrs Antonenko, and Ermonela Jaho. The production is by Richard Jones. The performance was hailed as glorious and rewarding.
Continue Reading »
Posted by Unknown at 12:48 PM No comments:

The cover art to Rolando Villazon's new albun "Villazon Verdi" has just been revealed. The album is intended to celebrate the 200th anniversary of Verdi and will feature works from I Due Foscari, Oberto, Don Carlo, Luisa Miller and Rigoletto. The album is conducted by Ginandrea Noseda and set to be released Novermber 2nd, 2012. Continue reading 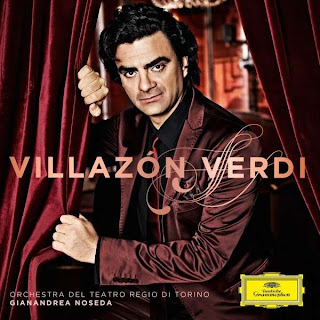 Posted by Unknown at 5:07 AM No comments:

After a 20 year absence, the Met will bring back Berlioz's masterpiece "Les Troyens" featuring Susan Graham and Deborah Voigt.
Continue Reading »
Posted by Unknown at 2:36 PM No comments:

Munich's Gotterdammerung to be streamed Live!

After an exceptional I Capuletti e Montecchi, the Bayerische Opera will present Gotterdammerung through their award winning Live Stream. The opera will be presented on Juily 15th and stars Nina Stemme and Stephen Gould.

Posted by Unknown at 9:45 AM No comments: