The Production
Richard Eyre's winning production returns to the Met after two successful runs. The production which premiered in 2009 brought a new and refreshing look to the work which had been plagued with two bland productions in a row. Set in the Franco period, Richard Eyre chose to use a rotating turntable to move the action forward. The turntable easily changes into a town square, a tavern where gypsies mingle, the smugglers hideout and the area outside the bullring. The sets are brought to life by ominous bricks and the lighting design. Eyre also brings a new element to the work using three choreographed dances during the preludes and interludes of each act. These dances depict the tumultuous relationship of Carmen and Don Jose. Some of the other memorable aspects of the production is the dance that starts the second act where Eyre brings together a Flamenco choreograph inspired by Carlo's Saura's movie "Carmen" and  the reveal of the bullring at the end as the Toreador kills the bull emphasizing Carmen and Don Jose's relationship being similar to that of a bullfight. Bringing this production back should be a real treat especially with a brand new cast. Anita Rachvelishvili reprises her acclaimed interpretation of Carmen at the Met. Rachvelishvili first got noticed when she opened the season for La Scala in Carmen in 2009 after having graduated from La Academia in Italy. While the production team was booed, Rachvelishvili garnered attention for her dark mezzo voice. The Met immediately hired her to sing the role and Rachvelishivili made her Met debut in 2011 replacing Elina Garanca for the second run of Carmen. Critics noted that if  she was nervous, no one would ever have noticed. According to the NY Times, she brought an earthy voice with sensual lyricism. However they did notice that she still has a lot to grow as an artist. That isn't a surprise as she is only 28 years of age and has yet to hit her prime. Critics noticed that she tends to scoop to her top notes and that she can be tentative at many moments in her performance. With a few years more of experience, Anita Rachvelshvili has undoubtedly grown as an artist and matured as a singer making her an artist to watch in the future.

Yonghoon Lee brings his extraordinary voice to the role of Don Jose for the first time at Met. Lee made his Met debut in 2010 as Don Carlo and immediately garnered attention by critics and audiences. In Japan he was a sensation as Don Carlo and last season in Nabucco he made the best of the small but crucial role of Ishmale. Critics stated that his voice is potent and is filled with expressiveness and security. Lee, a recent Mannes graduate, has sung Don Jose around the world to great acclaim. His expressive voice and outpouring emotions enhanced the tragedy of Don Jose. During his recent Chicago Lyric run in the role critics were also amazed at how Lee developed from a cool and calm Don Jose to a frightening character. They also noted how his Flower song threatened to stop the show. Having  already seen him once he is definitely a tenor to watch and a Don Jose to look forward to this upcoming season.

Andrew Richards makes his Met debut in the role of Don Jose. Best known for his work in Don Jose, Cavaradossi and Parsifal, Mr. Richards is a tenor that fully commits to his roles. He is known for his ardent dramatic voice and fervent acting. Critics lauded him with praise back in 2009 for his portrayal of Don Jose when he sang alongside Anna Caterina Antonacci. The performance was released on DVD. Critics noted that Richards was delicate with his phrases during his Flower song and sang ardently. His acting was believable and he brought a tragic quality. However others noted that he lacked security and confidence. It's hard to tell what Richards may bring to the role especially being a debutante and having never seen him. However what we do know is that he is a promising artist that is sure to bring excitement to the role. Kate Royal returns to the Met as Micaela. Royal who made her debut in the role of Eurydice in Orfeo ed Eurdice in 2011, sang recitals and concerts for many years before heading to the opera stage. Her lyric voice made headlines and during this time period she recorded two albums for EMI classics obtaining a lot of attention. I must admit that I was enraptured by her finesse and expressive qualities and was hoping she would come to the Met. Now Royal is transitioning to opera houses with more roles scheduled. During her Met debut critics were not as impressed as they noted her voice was small. However they could not deny her qualities commenting on her lovely voice and her handome style. Micaela should be a good fit for the soprano as the role gives opportunity to show her beautiful phrases and her ample range.  However the Met needs to give her bigger and meatier roles if she is to ever become a household name. Euridice and Micaela are not the formula for any soprano to prove their abilities as stars.

Ekaterina Scherbachenko makes her anticipated Met debut sharing the role of Micaela with Kate Royal.  Scherbachenko won the Cardiff singer of the world competition in 2009 and immediately obtained contracts for the worlds greatest theaters. The soprano has already headlined roles at La Scala, the Bolshoi and Monte Carlo Opera. A few months ago she headlined the Bayerishe's production of Eugene Onegin which was streamed online to millions of audiences worldwide. She was hailled for her brillant figure, her singing and her interpretational skills. All these qualities proved effective as she outdid the likes of Simon Keenlyside and Pavol Breslick. As Micaela, Scherbachenko should prove to be effective and may even outclass her cast members as she did in Onegin. Teddy Tahu Rhodes brings his suave baritone back to the role of Escamillo. Rhodes made his debut as Ned Keene in Peter Grimes in 2008 but took two years for him to really get noticed. In 2010, Rhodes got a last minute call to replace Mariusz Kwiecien as Escamillo with a three hour notice for the HD performance. While Kwiecien received poor reviews for the role, Rhodes proved to be satisfying and a good fit for the role. He was phrased for his strong delivery of the Toreador and for his muscular and self assured interpretation. At times his tone thinned out but that did not hurt his performance. If he was successful with no rehearsal time, Rhodes should easily be even more effective. To hear Rhodes full interpretation you can buy the Met's DVD.

Kyle Ketelson alternates the role of Escamillo for the second run of performances.Ketelsen first appeared at the met during the National Council Auditions and made his formal Met debut in Tosca in 2006 as Angelotti. However, it took him 6 six years to return and last year he got his first big assignments in the roles of Leoporello in Don Giovanni and Mr. Flint in Billy Budd. As Escamillo Ketelsen has sang the role all over the world to incredible reviews. His ardor, passion, technique and aggressive character have all been praised and critics have gone on to say that he is the ideal Escamillo. 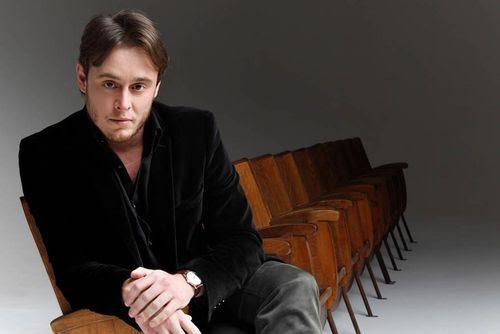 Michele Mariotti makes his awaited Met debut conducting Carmen. Mariotti known for his balance of intellect and passion, is the music director of  Teatro Comunale di Bologna. Since he was assigned to the theater, he has brought younger audiences and brought the orchestra and theater to a new level of music making as demonstrated through his impressive reading of I Puritani released by DECCA.  As a result of his successes the Met has engaged him to conduct three consecutive years starting with this years Carmen. He will also conduct at the Royal Opera, the Liceu and the Bastille. 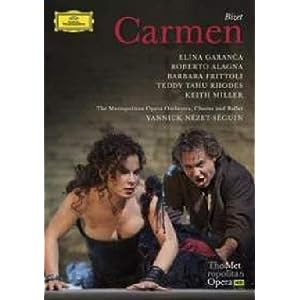 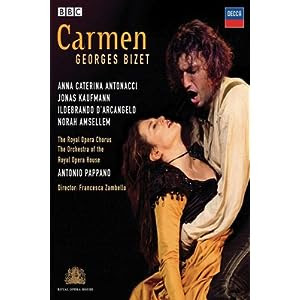 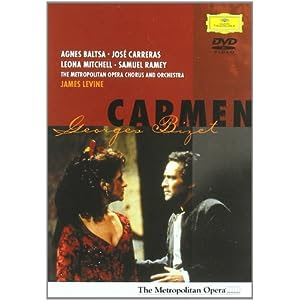 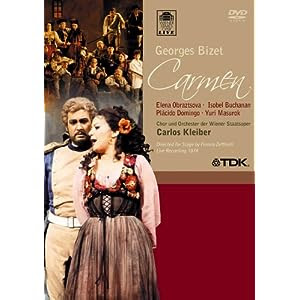 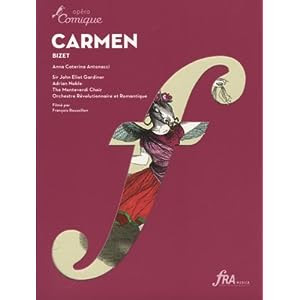 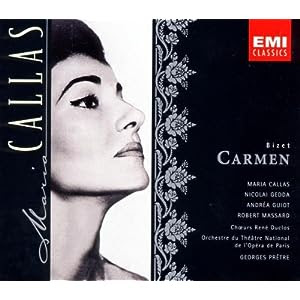 It's hard to pinpoint the essential Carmen recording being it is such a popular work and with hundreds of recording out there its hard to give one or two recordings. However these are my 6 suggestions based on the DVDs and my personal favorite Carmen on CD. The first one on this list is Elina Garanca and Roberto Alagna's refreshing interpretations which saw the premiere of the Met's current Carmen. The performance while not perfect is an incredible depiction of what Carmen should be like. The second is the tragic and frail interpretation of Jonas Kaufmann from the Royal Opera House. This performance is one of the most groundbreaking interpretations in recent years and matches the heights of Placido Domingo's legendary take. The third is of course is from the Met with Agnes Balsta and Jose Carerras bringing their incomparable chemistry to the roles. While it isn't the finest of their performances it is a treat to see them together on stage. The fourth is Placido Domingo's legendary interpretation which saw the premiere of Franco Zeffirelli's production at Vienna.It is truly one of the best Carmen's offered on DVD and one that should be seen by all. The fifth is a treat for any who have not heard Andrew Richards and would like to know what he sounds like before heading over to the Met. And finally The sixth is Maria Callas interpretation of the heroine who is my personal favorite recording on CD. Still there are many recording to chose from and there are many great ones that are not mentioned here.