After a 20 year absence, the Met will bring back Berlioz's masterpiece "Les Troyens" featuring Susan Graham and Deborah Voigt.


The Production
Francesca Zambello's production of Les Troyens returns to the Met after twenty years. Les Troyens has been known to be one of the most difficult operas to stage due to its length, and grand scale. The last time the Met presented the work was to celebrate Berlioz 200th birthday anniversary and Joseph Volpe hired Francesca Zambello. Zambello who made her Met debut to boos in 1992, directed a high concept Lucia that confused audiences and critics alike. As a result when it was announced that Volpe had decided to contract her 11 years later for the 2003 production, many were a bit concerned as to what Zambello would come up with. The result was a production that was visually stunning, seamlessly flowing and emotionally involving. For Zambello's production she needed a way to connect the operas two parts which begins in a Greek encampment in the city of Troy and ends on the shores of Carthage. As a result Zambello employs a semicircular back wall of metallic-looking rods and sticks stacked up like city ramparts, that also suggest the pileup of spears and stilettos from years of war between the Greeks and the Trojans. Hovering over the back walls is a globe like structure that ascends to the rafters in scenes when crowds march atop the ramparts. The production which requires a massive chorus and a huge cast needs a great director and Ms. Zambello was also capably equipped for the job. She was praised by critics for her crowd scenes as "she was able to find ingenious ways to characterize and contrast two very different societies, the Trojans and the Carthaginians." As for the principals Zambello was able to create unforgettable images such as Cassandra drawing a canvas curtain across the stage to isolate herself for her doom-saying soliloquy and during the love scene between Dido and Aeneas two dancers were suspended in the air from wires. It's unclear whether the production will remain intact after so many years but thanks to the Met's Live in HD transmission's the production will be immortalized. Marcello Giordani brings his uneven voice to the role of Aeneas. Giordani who made his Met debut in 1995 as Rodolfo in La Boheme, has for the last few years been a Met favorite and the go to singer. His large repertoire has allowed him to fill in for last minute cancellations and sing a vast amount of repertoire. He has also been included in 7 live in HD transmissions. Giordani started as lyric tenor and has quickly expanded into the spinto and dramatic tenor repertoire allowing him to sing some of the most difficult roles in the tenor repertoire. Last year Giordani sang Aida and Ernani and proved that the voice shifts between Lyric and dramatic were not a good match and made his voice weaker. In Aida he was barely able to sustain a phrase, sing over the orchestra and his low notes were not potent. As Ernani, a role I had seen him in a few years back, his middle range was still intact but he was no longer able to create beautiful pianismo's and his high range was frail and uneven. This year Giordani returns to the French repertoire after 4 years. His last excursion into this repertoire was in Damnation of Faust. Back in 2008 critics stated that the French style requires "a more refined French-style tenor, someone better able to handle its soaring pianissimo flights." They also commented that his high notes seemed "pinch and strained." Lacking the French style and the high notes, it may be hard for Giordani to pull off the daunting role of Aeneas. Yet the Met will feature him in his eighth Live in HD transmission. Susan Graham returns to Les Troyens after 20 years. Graham who made her Met debut as the Second Lady in Die Zauberflaute sang the role of Ascanius in 1993 in the Met's old production of Les Troyens. Twenty years later she will sing her first Dido at at the Met. However this will not be her role debut. As Dido Graham has triumphed all over the world with many praising her for her lyricism, her acting and her tragic portrayal of the complex role. Opera Today noted that in the 2005 performances at the Chatelet "Susan Graham builds Didon's character from the inner emptiness of grief through burgeoning love to a shattering climax of titanic rage, and suicidal depression when abandoned by énée." They also noted that  "Graham's extended mad scene is stunningly sustained, voiced with daring to the point of a rasp on the tone for dramatic effect. She then rises to Dido's final prophetic utterances, capping her performance with pure gleaming tone." Since these runs Graham's voice has continued to grow in size and power. With these major factors the Met will definitely have a memorable Dido that will mark Graham's fourth HD appearance. Deborah Voigt reprises the role of Cassandra after her acclaimed run in 2003. Voigt who made her house debut in 1991, was acclaimed for "bringing her customary blend of burnished power and pliant lyricism to her work." Since this run Voigt has changed physically and vocally due to her gastric bypass. She is a slimmer woman allowing her to move about the stage and becoming a more compelling actress. As a singer people have criticized her for apparently being inconsistent and lacking gleaming high notes. However I disagree with all the criticism. Yes, Voigt has lost some power in her voice but she still has a commanding voice. After last years Brundhilde, Voigt showed that she is still in top form. Voigt still has the same dramatic weight, beautiful phrasing and powerful high notes. However whether she still sings in the French style is yet to be seen as Voigt has specialized in the German repertoire making her voice less flexible. If Voigt continues in  the same direction after last years Ring Cycle, Voigt looks to be an incomparable Cassandra. The performance run will mark Voigt's sixth HD performance. For the supporting roles the Met has aligned a cast of all stars. Reprising his role as Corbeus, Cassandra's illfated fiance, Dwyane Croft who made his Met debut in 1990 as Fiorello in the Barber of Seville, will bring his suave baritone. Croft sang the role in 2003 at the opening of the production and was hailed for his excellent singing. Joining Croft, Eric Cutler will sing the court poet Iopas, Karen Cargill who was a standout last year as Waltraute in her Met debut sings Dido's supportive sister, Anna and acclaimed bass Kwangchul Youn will sing the role of Dido's minister, Narbal.

Fabio Luisi brings his finesse to Berlioz's complex score. Luisi who made his Met debut 2005 had one of the busiest season last year as he was assigned as Principal Conductor of the Met and had to take over all of James Levine's assignments. He conducted 7 operas and in April he conducted 20 performances, a Met record. As a conductor Luisi is very precise and fine. His music making is sometimes interesting and stylish and he is known for his swift tempos. However his music making sometimes suffers due to those tempi as it sometimes feels rushed and lacking in intensity. As a result critics have noted that he is uninteresting and boring to listen too. Such was the case in his performances of Manon. While he brought fast moving tempos and energy to the work, his tempos took away from the urgency and drama and as the financial times stated he kept the "emotions taut". While this could have been a case of fatigue, Luisi will have a slew of assignments this year at the Met. Les Troyens will most likely be his second hardest assignment after the Ring Cycle as it is a long and intense night and it will also be his second French opera he conducts at the Met. It will be interesting to see how Luisi copes with the work and how critics react to his conducting. Les Troyens marks his sixth Live in HD appearance. 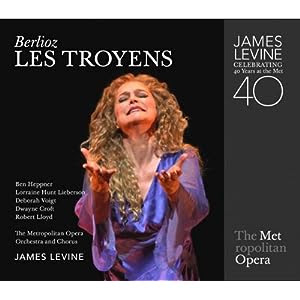 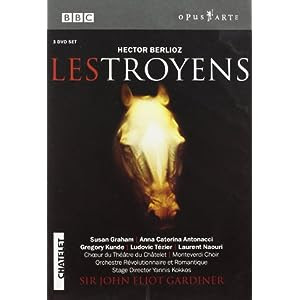 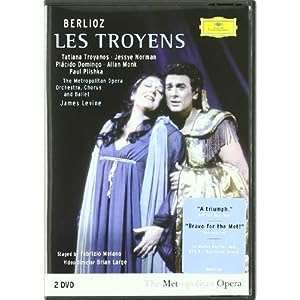 The following represent the best of the limited recordings available of the opera. The one on the left from the Chatelet stars Susan Graham, Anna Caterina Antonnacci and Geoffrey Kunde. It features Grahams remarkable interpretation of Dido. The one on the right from the Met stars Jesse Norman, Placido Domingo and Tatiana Troyanos. Finally the one in the center represents the only document of the historical performances of the 2003 run of Francesca Zambello's production. It stars the original cast Lorraine Hunt Lieberson, Deborah Voigt and Ben Heppner.