Courtesy of La Cieca from Parterre, here are the HD operas rumored to be scheduled for the 2013-2014 season.

There are seven new productions scheduled of which Two Boys by Nicol Muhly is rumored to not be HD material. A projected new staging of I puritani will almost certainly not happen, with Natalie Dessay presumably relieved of all further bel canto duties, and the men in the cast—Lawrence Brownlee, Mariusz Kwiecien and Michele Pertusi—rolled over into other projects in spring 2014. 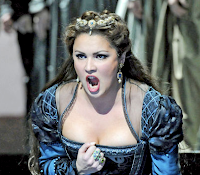 3. Die Fledermaus (Phillips, Schaefer, Szot, Costanzo, Fabiano; Conductor: Adam Fischer; Director: John Hall)-Costanzo look like he'll be doing Orlofsky interestingly
4. Prince Igor (Abdrazakov, Dyka, Semenchuk, Kocan, Ognovenko; Conductor: Valery Gergiev; Director: Dmitri Tcherniakov)- should be interesting to see what Tcherniakov will do after his Trovatore in La Monnaie.
5. Werther (Garanca, Oropesa, Kaufmann, David Bizic; Conductor: Alain Altinoglu; Director: Richard Eyre)- This is sure to be a highlight especially under the genius that Richard Eyre is.
Then there are four returning productions that are said to be locked in for HDs:

6.  The Nose (Szot, Ognovenko)- same production from 2009.
7.  La Cenerentola (DiDonato, Florez)- the second one but this one presumably a better cast.
8.  Tosca (Radvanovksy, Alagna)- not again. Especially when Radvanovksy sings out of tune and Alagna yells. hopegully its struckmann who will save the day.
9.  La boheme (Grigolo or Calleja)-I'm sick and tired of Boheme and Grigolo should expand his repertoire if he doesn't want to be stuck with these same roles for the rest of his life. But lets face it if they do Boheme lets have Grigolo, hes a better artist.
Despite the fact that there are three Strauss operas on the roster for next season (Arabella, Der Rosenkavalier, Die Frau Ohne Schatten), none will be presented on HD. Neither will be A Midsummer Night’s Dream, even though 2013 is the Britten centennial. What a shame considering these are gems and three of these productions are rarely performed and have never been taped for posterity.
Now, the next two are only gueses based on the artsits attached to the roles.

10. Rusalka (Fleming, Magee, Zajick, Beczala)- The should have been done a few years ago with Antononeko and Blythe.
11. Andrea Chenier (Racette, Alvarez)- I hope this is not true because cast is destined for bad reviews especially with Alvarez in the title role.
And the last slot is left to either  Norma (Radvanovsky, Aldrich, Antonenko)- might be good, Cosi fan tutte (Phillips, Leonard, de Niese, Polenzani) Mozart needs an HD badly or "A projected return of Parsifal has apparently been canceled in favor of a revival of" Wozzeck. The Berg opera is rumored to feature a very fancy cast indeed, including Karita Mattila, Thomas Hampson and Simon O’Neill, and there are even whispers of a comeback to the Met podium by James Levine! I hope this is true.

12. Wozzeck (or Cosi)
But where is Wagner?
So what do you think of this next season HD your thoughts?
Ta
Posted by Unknown at 12:00 PM