The Production
The Tempest makes its New York Premiere at the Metropolitan Opera House on October 23. The opera which was composed by living composer Thomas Ades was first staged at the Royal Opera House. It later received a premiere in the US at the Santa Fe Opera and then was premiered in Canada in the Robert Lepage production that will now come to the Met. Lepage who made his debut in 2008 in La Damnation de Faust has been repeatedly accused of playing with his productions to create visuals and never really focusing on the text nor the story. For example his Ring cycle at the Met became one of the most polarizing productions to date as many criticized the lack of inventiveness in the production. Critics stated that it was a bunch of repetitive projections, none of which really exhibit technological advance that is leaps and bounds ahead of more traditional theatrical tricks? Where were the flashy images that would make us feel truly immersed in the environment created by these expensive, heavy, and even dangerous planks? Were a bunch of zebra stripes between scene changes because lack of imagination the most abstract LePage could come up with? Not to mention the different combinations of imagines portraying wood. Or all that running water time and again. Where were the plethora of shapes that these planks would form as previewed by the original Ring trailer? Was a spinning wheel really all it could come up with? For all the critiques, Lepage has obtained another chance with the Met. For his new production, he has decided to bring the action to the 18th century inside the original La Scala theater. He stated that La Scala was a magical place in the 18th century and because the opera is magical, he thought it would be interesting to subvert the action within the theater. The production premiered this past summer in Quebec where critics were mixed about it as they complained that production simply isolates the audience with its effects. Certain elements that bothered included Prospero overhearing Miranda and Ferdinand in a prompters box and Ariel manipulating a clunky spotlight. They also did not like the whole concept as it took away from the magic of Shakespeare's play. However on a good note they stated that the opening storm was inventive. Usually after first runs directors look back at their missteps and try and fix them as they did with Gotterdammerung and even Tosca. Working with a new cast Lepage will most likely find new territory  to cover that could make his vision more understandable and hopefully enjoyable. The Tempest marks Lepage fourth HD transmission

Simon Keenlyside sings the role of Prospero for the first time at the Met. Keenlyside has been in high demand ever since he made his Met debut in 1996 as Belcore in L'Elisir d'amore. He has expanded his reperotire from the lyric to the dramatic with huge success. In 2004 when  Keenlyside premiered the Tempest at the Royal opera House in the role of Prospero and immediately became a sensation in the role. Critics stated that he was force that could not be reckoned with. They were mesmerized by the fact that he was able to inhabit and invigorate the character with his gruffness and ambiguity. As for his singing they stated that he communicates the ambiguity of the character very well. Through these raves, the Met should expect a complete performance by the leading interpreter of this work and thankfully will be preserved through his HD performance. The Tempest will mark his third appearance in the Emmy award winning series.

Isabel Leonard steps out of Mozart and Rossini to sing her first Miranda. Ever since her 2007 debut at the Met in the role of Stephano in Romeo et Juliette, Leonard has explored the music of Mozart to great acclaim. Critics  have raved about her convincing acting and her vocal agility. They have even gone on to compare her to the legendary Federica Von Stade. Last year Leonard stepped out of her comfort to sing the difficult role of Rosina in Il Barbiere di Siviglia and the results were splendid. While Leonard did not add the stratospheric high notes in her performance she was still able to convey the delicacy, elegance and virtuosic qualities in Rossini's music. This year with Miranda, a fiendishly difficult but smaller role, Leonard will surely be someone to look out for. With her incredible stage presence, acting skills and beautiful vocalism, Leonard is sure to convey the frailty and the strength of Miranda. Leonard's performance will mark her second appearance on HD

Audrey Luna returns to the Met after an incredible debut in the role of the Queen of the Night in Mozart's The Magic Flute in 2010. Luna will sing the difficult role of Ariel, a role that goes above a high F. Luna demonstrated her abilities in the role when she previewed Ariel's aria at the Greenspace. She demonstrated the flexibility, the delicacy and the mischievous character in the music. Additionally Luna has already sung the Lepage production in Quebec where critics raved about her vocal and physical abilities. Critics hailed her for being an acrobat in all senses as Lepage asks his singer to hang from high altitudes as if she was flying. Aas for the high tessitura that the music requires she was able to pull every note off. Luna is sure to make a breakout in this role that will make her a mainstay coloratura at the Met. Ariel marks Luna's first HD appearance.

Alek Shrader makes his Met debut in the role of Ferdinand. Shrader first came to prominence when he won the 2007 National Council Auditions and was later featured in the Susan Froemke film The Audition. He later made his San Francisco Opera debut as well as some other notable American and European debuts. Shrader has thus far built a career in the lyric repertoire particularly in the bel canto repertoire. He has been hailed for his flawless technique and for his acting skills. While the role of Ferdinand may not be the biggest of parts, Shrader will definitely have some time to show himself off this season  as he will be on the big screen in his first HD and later will sing the role of the Count in The Barber of Seville. If he shows the same promise from 2007, Shrader is sure to be a big draw in the future of the Met.

Toby Spence sings the role of Antonio for the first time. In 2010 Spence made his Met debut in the role of Laerte in Thomas' Hamlet but never returned. However Spence has garnered a reputation as one of the leading lyric tenors in the world. Spence was part of the original 2004 cast that premiered Ades' work. However on that occasion he sung the role of Ferdinand alongside Christine Rice. Critics praised his sweet voice and his ability to mesh it so well his partners. While Spence may not be singing Ferdinand anymore he is sure to bring beauty, and delicacy to the short but substantial role of Antonio. 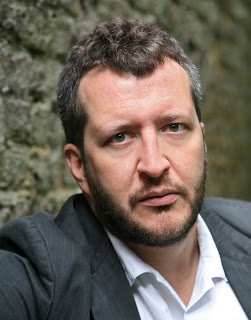 Thomas Ades makes his Met debut conducting his own score. When The Tempest first premiered in 2004, audiences and critics were very mixed by Ades second opera. Some critics  stated that it was one of the more successful Shakespearean adaptations in opera  and went on to say that it is a tribute to the imaginative power of his score that it nevertheless succeeds so well in creating its own world, and in fleshing that out with such memorable musical images. However others were not so enthused as they stated that the vocal writing is unresolved and it tries to mix modernity with grand standing pageantry. As a result Ades revised the opera and in 2007 the work was reprised at the Royal Opera House where critics objectively assessed it. Critics raved about how Ades was so vividly able to characterize each protagonist with precise musical worlds. For example for Ariel there is always these eerie high voice melodies while for Prospero there is always gruff and assertive music and for the lovers there is an innocence in the music. Critics also praised Ades conducting as they stated that Orchestra and Chrous were both alert and creating vivid colors. With Ades back in the pit, The Tempest's score will most likely resonate with audiences. 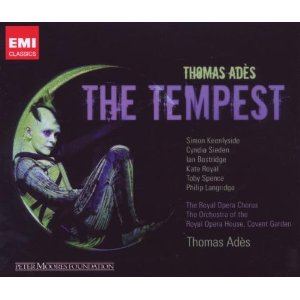 For those who are not associated with Ades' work, this EMI CD will enlighten audiences. While some of the music a bit on the lengthy side and can be tedious at times to listen to, the singing, and the orchestral playing will keep you involved. While it would have been better  to release a DVD, this is recording gives justice to one the finest modern operas.