Met Opera Review: The Elixir is a dose of Charmless Mediocrity 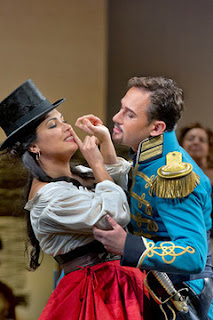 By Francisco Salazar
(For the October 5, 2012 Performance)

When one goes to see Donizetti's L'Elisir d'Amore, audiences expect laughs, fun and to feel good. On this evening the opposite was seen. There were occasional laughs stirred by Donizetti and Felice Romani's incredible text and a few by Bartlett Sher's uninspired direction. And of course there were the final routine curtain call applause.

What the evening lacked was a real show stopping moment. Instead what was seen were singers who moved around without any direction upstage and downstage and lots of "parking and barking," the term that refers to standing around. There was also uninspired singing and languid playing by the orchestra. Not to mention the production felt as if it was 20 years old.

Bartlett Sher's new production of L'Elisir is beautiful on the outside but ugly and messy on the inside. Sher's production opened the season of September 24 to mixed reviews as it replaced John Copley's colorful production. I had seen the dress rehearsal on 20th and while I wasn't thrilled I still had high hopes.

Sher's production is based on both the works of Oliver Messel from the 50s and the original design of the opera from 1840. He brings an arid and old fashion look to the work. It recalls the traditional sets of legendary directors Otto Schenk, Franco Zeffirelli and Del Monaco.  When the curtain opens, there is a nice village elaborately set up with trees, houses, tables and beautiful costumes. It looks as if this production will be played straight out with its usual comic flair. Except it starts to fall apart the moment Sher infuses his ideas of the Risorgimento (a time period when the political and social movement that agglomerated different states of the Italian peninsula into the single state of Italy in the 19th century). Sher introduces Belcore, Seargent of the regiment,  and his soldiers as aggressive and violent. Belcore will do anything to get the love of Adina, even throwing her to the ground and even dueling with her.


Adina is a strong woman, who will fight anything to maintain her freedom as is seen during an ensemble in the first Act when she takes a whip in defense to Belcore's aggression. The violence and intensity of the first scene opens up some questions which are furthered in the second scene with Dulcamara.

Dulcamara arrives in a beautiful plaza in lavish cart. He steps out to sing his aria and  during this infectious music, we see that Dulcamara's men take out some armament as Dulcamara's distracts the soldiers with his talk. And it only gets more violent when Nemorino pleads with  his beloved Adina to wait one more day for him as she decides to marry Belcore. Here Belcore's soldiers start kicking him around without any pity. One expects that all this mystery and violence will pay off some way in the second act. However what Sher leaves you with is a load of questions with no answers.

Additionally the lavish sets seen in the first act are not consistent with the second act. He sets the second act in a barn that looks more like drab and the last scene where Nemorino sings "Una Furtiva Lagrima" is set in a field of hay. It seems as if Sher forgot his inspiration and decided to go back to John Copley's production and attempt to bring the lightness in the opera. However it's far too late especially when all the characters except for Nemorino are so unlikable.

To add to his confused ideas he adds a number of props one expects to be comical or will add more layers to the story. However some never return or are used poorly. For example Nemorino has a diary that Adina steals from him after their first duet. One expects Adina to read this at one point since it was emphasized as an important aspect during the prelude. Then there are oranges that Nemorino picks up during his "Tra Tra La La La" as he savors the Elxir for the first time. There is an expectation that he will juggle or throw them around. Nothing. And then again Adina takes them and just plops them down on a seat with no purpose. Not to mention that Adina wears a hat that is supposed to symbolize her masculinity yet Sher gets rid of it at the end of the opera. Is the reason because she got Nemorino and lost her masculinity or did Sher simply realize it was a bad idea?

And of course there were the singers. I will admit that I am a huge Anna Netrebko fan and that I am the first to defend her when most complain about her. She is a complete artist with vocal chops to go with tremendously visceral acting abilities. But on this night she had one of the most disappointing nights of her Met career. One always expects Netrebko to give energy to the production even if it is lacking in content as she had done in last years dull Anna Bolena or in 2007 I Puritani. But this night it seemed as if she was sick or just not up to the challenge. When she started her first aria "Bendette queste Care" it was apparent that there was some insecurity. There were strident high notes and wobbly sustained notes. Still it was an entrance and nerves are always an issue. As she continued on the evening there were some hints of improvement such as her first and second duet with Nemorino where she sang with beautiful pianissmi and intoxicating phrases. One only wished she would continue like this. However the the pezzo concertante at the end of the first act  was rather disconcerting. While Ms. Netrebko carried the chorus, she sang many passages out of tune. The second act was no better as she started with the barcarolle. However it seemed as if Netrebko was more concerned with eating the chicken on the table than singing of the music. Then came her duet with Dulcamara and her aria "Prendi." These being the low points. Netrebko sounded as if she was fatigued, and out of breath. She cracked on two instances and when she had to reach the climaxing high notes she cut them short as if she was afraid to sing them or as if she was forcing the notes. And if it didn't get any worse, Netrebko relied on stock movement's making faces that no one could see except for the HD cameras that were were not present. She ran around the stage as if she was lost or bored and when it came time to dance, she was slow and not energetic. All in all and despite being one of her biggest admirers, I must admit that Netrebko was not the height of her powers. One only expects she improves for the HD and may be she''l be inspired when her Husband Erwin Schrott comes on stage in Feburary as Dulcamara.

Then there was Matthew Polenzani. A singer, who is polished in every way, found some inspiration in the first act as he jumped around, stood on seats and even danced. His vocalism in the first act particularly in the concertante was tender. He sang with beautiful pianissimi and with gleaming high notes. But the second act was a letdown as it seemed that Polenzani was fatigued from all the jumping around and not really bringing genuine emotion. His "Venti scudi" duet with Belcore seemed as if he was forcing his voice and at the end he even cracked. His "Una Furtiva Lagrima" was a forced affair sung with emotion but too much force in his voice and too many intonation issues. There seemed to be a moment where he was about to crack as his voice weakened. Thankfully he ended with two extended  notes and beautiful mezza voce. Unfortunately though his stiffness and his lack of chemistry with the rest of his cast hindered his complete performance. 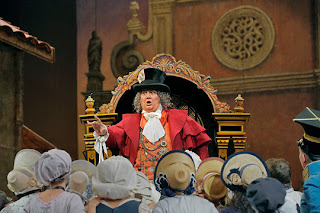 Ambrogio Maestri was also a complete letdown. When the door opens to his cart, one expects such a robust man to open his voice and produce an empowering sound. However, what you get is a small sound that puts into question how he has sustained a career singing Verdi. Maestri possess a lyric voice that rings nicely but does not produce anything magical. He sings a routine Dulcamara with no new insight and his acting is made up of small gestures and stock movements. And when it comes time to interacting with his colleagues, Maestri is lost. He has no idea how to interact. During his duet with Adina "Quanto Amore" Netrebko attempted to dance but Maestri was incapable of following her lead and during his duet with Nemorino, Maestri stood around while Polenzani ran around aimlessly.

The only salvageable singer was Mariusz Kwiecien who unfortunately had no one to work with and therefore lacked any comedy. Having seen him last year the same role, this years Belcore was better sung with some issues in his entrance aria. Still Kwiecien's suave voice improved throughout the night. He sang the rapid Coloratura with no effort and with so much polish. However when it came to the acting department, he lacked the chemistry I expected with Netrebko and with the rest of the cast. Instead he relied on his soldiers who seemed better fit for their roles.

Ann-Carolyn Bird was a serviceable Giannanetta and Maurizio Benini conducted without any spunk or energy. It seemed as if he was conducting the first rehearsal of the opera. There was no cohesion between the singers, the chorus and the orchestra.

All in all, this L'Elisir was a dreary affair that may benefit from a better cast and director if it is to succeed in the future.