This felt inevitable after Elina Garanca cancelled Werther.  The Met press office: “Two rising young sopranos will make their Met debuts earlier than originally scheduled when they share the role of Gilda in Verdi’sRigoletto later this fall, replacing Aleksandra Kurzak, who has withdrawn due to pregnancy. Russian soprano Irina Lungu will sing the role on November 11, 15, and 18, and Bulgarian soprano Sonya Yoncheva will sing the role on November 21, 27, 30, December 4, and at the December 7 matinee. Kurzak is expecting a baby this winter with her partner, tenor Roberto Alagna.”
Posted by Unknown at 6:58 PM No comments:

Sondra Radvanovsky returns to the Met in one the most demanding roles in the repertoire. Aleksandrs Antonenko and Kate Aldrich join the cast with Riccardo Frizza in the pit.

For more information Click here for the Latinos Post Preview
Posted by David Salazar at 6:01 AM No comments:

The Nose will premiere this afternoon at the Met Opera. The opera will be conducted by Valery Gergiev and stars Paulo Szot.

For more information Click Here for Our Preview.
The Met will broadcast the Premiere at 1pm on their website.
Posted by Unknown at 10:04 AM No comments:

Anna Netrebko Tickets For 2015 On Sale

As I was browsing Facebook I came across a concert scheduled for 2015. The Albert Hall in London has already scheduled Anna Netrebko for a concert performance of Iolanta. I know the soprano is scheduled to sing the role at the Met in that year. However the Met has not yet to announce that. It seems odd and a bit crazy but it looks like schedules are coming out quicker every day. Whatever the case may be, Tickets are now on sale and the funny thing the top section is already sold out.
Posted by Unknown at 8:34 PM No comments:


Valery Gergiev returns to the Met Podium for William Kentridge;s production of Shostakovich's "The Nose" Paulo Szot stars in one of his most acclaimed role.

When the Met first introduced the chamber opera in 2010 audiences and critics complained that the work was too small for the big theater. Nevertheless the production by Kentridge was hailed for its visual style and inventiveness. Critics hailed it and stated, Kentridge "has unleashed his imagination on Shostakovich’s bitterly satirical and breathless opera." The production which is set in the 1930s is likely to receive majpor attention this year as it will be included in the Live in HD transmission. With an incredible cast and conductor it is sure to be one of the most memorable nights at the opera.

Continue Reading »
Posted by Unknown at 8:58 AM No comments:

A day after the Met opened its 2013-14 season Placido Domingo signed  copies of his new CD Verdi. The baritone-Tenor  was accompanied by his two sons and his grand child as well as his wife Marta. Dave and I were there to get autographs in a line that included hundreds of fans. Here are a couple of pictures we were able to get during the signing. 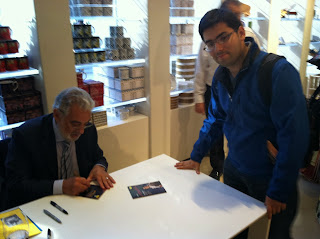 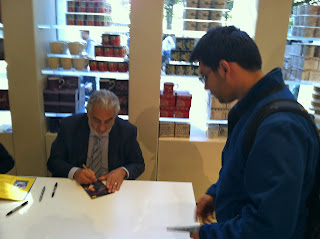 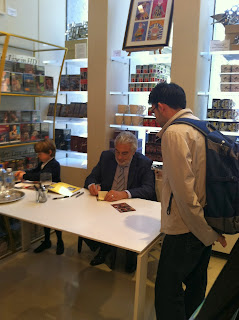 For more Pictures of the event visit our facebook page

Posted by Unknown at 3:46 PM No comments:

For More Information Click Here
Posted by Unknown at 8:17 PM No comments:

To Celebrate Britten's 100 anniversary Anna Netrebko, Thomas Hampson and Ian Bostridge recorded the composers celebrated Requiem with Antonio Pappano. The CD is slated for release in October with Warner Classics.
Posted by Unknown at 9:35 AM No comments:

The New York Times has unveiled two pictures of Anna Netrebko and Mariusz Kwiecien in Eugene Onegin. The production is set to open on September 23 and is one of the most anticipated operas of the year.

Posted by Unknown at 8:22 AM No comments:

Pretty Yende to Sing Four Roles at the Met

CD and DVD release For the Month of September

The month of September see the release of many great CDs and DVDs from the top artist in the industry.

The first release of the month is a CD recording of Riccardo Muti's acclaimed Otello. I was able to see a performance of this opera in Carnegie Hall with Muti and the same cast on this CD and it was one of the highlights of that season. The cast includes Aleksandrs Antonenko, Krassimira Stoyanova and Carlo Guelfi. The CD will be released by CSO Resound and is a must buy.
Continue Reading »
Posted by Unknown at 9:00 AM 1 comment:

I just came across the Kickstarter campaign for the New York City Opera. I have never attended the companies performances but I know that they have been a foundation and an elemental link to starting many young opera singers careers. I would hate to see this art form be lost because there is no money. If you think about it, it all starts with one company and then for all we know it could happen to the Met or LA Scala or the Covent Garden. I mean that seems exaggerated but the New York City Opera used to be so important to Lincoln Center and it no longer has a home. I will attach the link to this blog and see if any of you guys want to donate or spread the word. Believe me it will be for a great cause. Click here for the Kickstarter 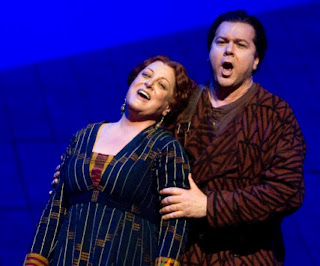 Deborah Voigt Has decided to retire the role of Isolde in "Tristan und Isolde" as she bowed out of the revival for the Washington National Opera. The singer said, "Returning to a role that I love but haven’t sung in a number of seasons, and encountering its unique challenges, has caused me to reconsider keeping it in my repertoire,. I’m very disappointed that I feel compelled to withdraw from this production, but am very happy to continue my association with WNO both this season and into the future." This is the second Wagner role she bows out of. She was scheduled to make her role debut as Ortrud in "Lohengrin."