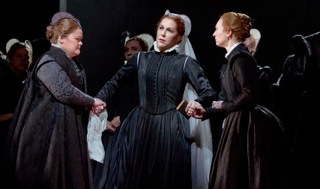 The Production
After directing the opening night of last season in Anna Bolena, David McVicar continues the Tudor trilogy with Maria Stuarda. The director which took Bolena literally has stated in interviews that he plans on taking some liberties with Stuarda. He stated that he wants to blend both fantasy and realism. He stated that his set designer john Macfarlane will bring painterly perspective to the sets. For example the writings on the wall of Act Three will represent the letters that Maria Stuarda wrote while in prison. While Anna Bolena was unimpressive, Maria Stuarda is a more theatrical opera and could give David McVicar an opportunity to shine. The opera will be part of the Met's HD performances. 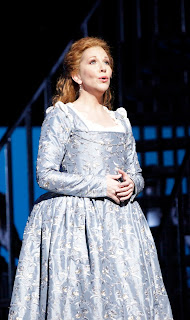 Joyce Didonato returns to the Met in her acclaimed interpretation of Maria Stuarda. The Diva made her Met debut in 2005 as Cherubino in Le Nozze di Figaro sang Maria for the first time last year in Houston. Didonato will sing the Mezzo Maibran version of the opera. Donzetti originally composed the work for a soprano and  as a result audiences will not hear the interpolated E Flats usually sung in the performance. Nevertheless critics were ecstatic making it one of the highlights in Houston. Critic's stated that "DiDonato brings Mary to vibrant life - exuding nobility and grace under pressure, yet also warmly human. With her legato phrasing, the power and clarity of her vocal production, there's no part of her range in which she does not sing with distinction." They also stated that Didonato's "entire closing scene is her tour de force." Critic's also credited her for the "colouratura runs" and the fact that she "could float pianissimos and leave the audiences hanging on every breath." If   sings the way she did in Houston she will be one of the highlights of this year's Met season. The performances of Stuarda will be Didonato's fourth appearance on HD. 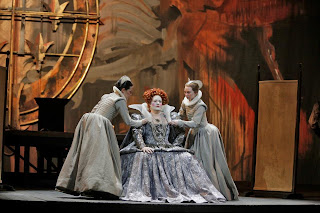 Elza Van den Heever makes her awaited Met debut after an outstanding Chicago Debut. Ms. Van Den Heever recently revealed in an interview that she shaved her head to prepare to for the role of Elizabeth, a role written for mezzo soprano but being sung by a soprano this year. Van Den Heever has never considered herself a diva and instead an actress. The soprano who hails from South Africa has appeared in many of the leading opera houses and has been hailed as one of the most promising sopranos of our time. Last year when Van Den Heever made her Chicago debut as Armida in Rinaldo critics called her performance "outstanding." They stated that she "possesses a gleaming, powerful voice with daunting agility." If these performances are any indication of Van Den Heever, her Met debut may be one to look forward too. These performances of Elizabeth will be Ms. Van Den Heever's first appearance on the HD transmissions. 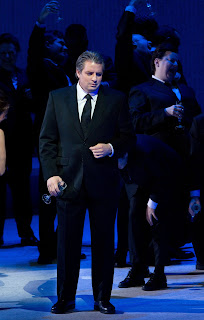 Matthew Polenzani makes his role debut as Leicester after a lackluster opening night this past fall. Francesco Meli was originally scheduled to sing the role but stepped out earlier in the season after realizing that his voice was no longer good the role. Polenzani who made his Met debut in 1997 stepped in during his L'Elisir d'Amore run. Polenzani possesses one of the most polished voices of today and able to make beautiful pianissimos. His acting skills have improved as well as his stage presence. Earlier this season as Nemorino, Polenzani obtained mixed reviews. Critics commented that he was "plain" and and that his singing was "pristine but what you heard was well-crafted singing, not a cry from the heart."Others commented that he was a "letdown as it seemed that Polenzani was fatigued from all the jumping around and not really bringing genuine emotion." However there were many positive reviews to his performances as they stated that he has "matured with his assumption of heavier leading tenor parts" but nevertheless "his was a fine performance."Many will be mixed on how Polenzani sings Donizetti but perhaps it is comedy which does not suit this great artist. This will be the fifth appearance for Polenzani on the Met's HD transmissions. 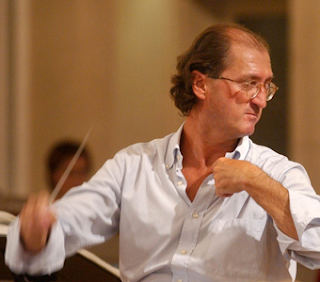 Maurizio Benini returns to the podium after an energetic opening night, Benini promises to infuse vitality to the Bel Canto genre. The Italian conductor recently stated in an interview that Bel Canto is sometimes not treated respectably and "needs to live." The conductor stated of its form that "the om-pah-pah orchestration is so simple that the musicians can easily lose concentration: “There is nothing to do, so few notes. But the problem is that these notes must have life, and if you don’t think about the line, it quickly becomes boring. I ask for life and expression in the accompaniment. Each note must have emotional importance.” He also stated that in the repertoire there is “nowhere to hide. The simplest things are always the most difficult.” Benini has demonstrated his abilities in the bel canto repertoire and without a doubt he will bring new life to the work. This will be Maestro Benini's fifth appearance on HD.