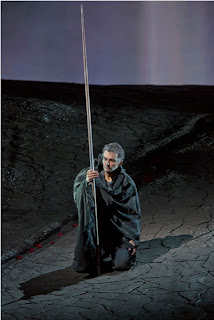 By Francisco Salazar
(For February 15, 2013 performance)

Wagner's final opera Parsifal is a work that can test your patience in many instances. Its music lacks the melodic abundance of such works as the Ring Cycle or Tristan und Isolde. Wagner decides to go for a few simple melodies that repeat throughout the night. The result is music that transcends the evening, one that elicits emotion and most importantly that brings drama to this sometimes long evening.

On this night the Met opened its first new production of the work since 1991. The production by Francois Girard was met by enthusiastic applause but also with a slew of boos. The Met audiences seem to have become accustomed to booing any new production even if it did not disrespect the work. Girard's production is the complete opposite of Otto Schenk's magnificent natural production which had no symbolism and which opted to show the story in richly designed sets. Girard opts for a symbolic work that strays from the pageantry and allows for the singers, the effects, and the music to do the work.

The production is set in a post apocalyptic era where the world has fallen to pieces. There is a divide in society between the sinners and the knights of the holy grail. The opening of the production shows a black curtain that reflects on the audience. According to Girard, the curtain represents our own search for spirituality and fundamental principles of compassion and temptation. The curtain then becomes translucent as the prelude is played and a number of bodies appear sitting in seats all dressed in black. One by one they begin to stand up leaving Parsifal in the middle. The men take their suit jackets off leaving them with their pure white shirts while the woman are left in the dark with their hair over their face. The men move to the right while the women move to the left. The separation in society is vivid through a crack representing a dried river. The women never cross to the other side.

Throughout the first act the men sit in a circle representing the sanctuary of the holy grail. Upstage images continuously change  of clouds, planets, smoke and what seems like extreme closes up of skin. When Kundry enters the stage she loiters around on the side of the women. She never crosses the river and she seems tormented. When Parsifal enters he is a foolish and emo  young man unconscious of his surrounding. Gurnemanz is the commanding force of reason while Amfortas is crippled and destroyed man. His inability to walk and dependency on his servants only shows his weakness. The first act comes to a rousing finale as the men during their consecration scene perform choreographed prayer movements with occasional simultaneous reactions. When Gurnemanz asks Parsifal if he understood what occurred, Parsifal does not answer. Furious Gurnemanz throws him out of the temple. Parsifal runs towards the dried river which opens with blood spilling out.

The second act begins in Klingsor, the necromancer's magic lair. The lair is represented by 1,600 gallons of blood all over the floor with rocks closing it off. Upstage in a slight opening, smoke is vivid. The blood represents Amfortas wound, the sins of mankind and at the same time it is a representation of hell. The curtain opens and in the center is Klingsor with his spear of power. Kundry in black is far away from the blood. Only when she is turned into a young woman does she interact in it. When Parsifal arrives he is man confused and lost but also tempted by his sinful wants. The Flower maidens represented by black and white start off with their hair over their faces. However once Parsifal arrives they unveil themselves and an erotic choreograph where they end up fighting for Parsifal in a tug of war. Parsifal falls to the ground and in comes Kundry youthful in white as if she was pure. A bed is brought in by the flower maidens but what starts as a white clean one starts seeping blood. It is as if Kundry was a type of Eve, tempting god and but ultimately failing. Parsifal does not oblige and ultimately takes Klingsors spear as both the necromancer and the flower maidens point multiple spears at him. Kundry is left once again thrown on left side of the stage by the sinners.

The final act is most likely the most striking of them all. The curtain opens in an all black desolate stage. The Chairs are all thrown around, the knights clothes is all torn and they once again have their suit jackets on. There is no longer any difference from the sinners.  When Gurnemanz enters the stage his hair is all white, and his clothes are torn. Kundry continues to be on the other side of the river.  The visuals continue to be of smoke and planets. When Parsifal enters the stage he himself has become old, decrepit, and wiser. One of the most striking images is when Parsifal lies on the floor in a cross position as if he is cleansing his body. Another beautifully staged scene is when Kundry washes his feet and this when she finally crosses the river. The following scene sees the return to the Grail Temple and sees the knights who can no longer stand together in a circle . Amfortas ends up in Titurel’s grave suffering and asking for death. Kundry then re-enters with the Grail's box. Then Parsifal shows up, and the women and men intersperse themselves, and Parsifal restores the Grail’s power by sticking the spear into it. He lifts up the grail, Kundry and collapses.  As Wagner says “entseelt,” her soul has finally departed, and all are blessed. The final image is a ring representing the circle of life.

Francois Girard excels in never creating any distractions and allows moving the story forward. It is also the first production of any Wagner work where the actors are forced to be physical on set and each one brings a fresh new interpretation.

Jonas Kaufmann has been called the best tenor of our generation and he proved it once again. If his Siegmund was a revelation, his Parsifal was a triumph. Kaufmann is a complete singing actor coming in as youthful, energetic and disoriented man. His first phrases were sang with strength and rebellious character. When he meets Gurnemanz he is defiant but is quickly intimidated once Gurnemanz speaks to him. Kaufmann watched over the consecration  in confusion. This was a young man who seemed directionless putting his hands in his pockets, sitting on one of the chairs and then standing up looking around. He was trying to understand but could not reason. Act 2 saw Kaufmann changed. He entered the scene as a more mature man but one that was willing to experience. As the Flower maidens attempted to seduce, Kaufmann seemed to be enjoying the moment but at same time full of remorse. Then when Kundry tries to seduce him, Kaufmann at first falls for it. He goes into her arms, lies down and looks enraptured. But when he realizes her trick, he sings his "Amfortas Die Wunde." Kaufmann sang with anguish, pain, and a vigorous sound. This was one of the high points his performance. He was a completely distraught man. In act 3 Kaufmann appeared as a decrepit man, having difficulty walking and using a cane to get him through. His voice also reflected this as he sang with delicacy and sotto voce. Every movement was nuanced and phrased to suit the character. By the end of the opera, his voice was renewed and he sang with the same youth and power from the beginning. Kaufmann delivered one of the greatest opera performances I have seen in years and one that will be recorded in the history of opera.

Rene Pape also delivered a performance for the ages. Pape brought his booming sound to the role but also showed off his pianissimo singing. He sang with authoritative sound at the beginning but at the end of act 3 with a weary and deteriorated one. Each phrase was caressed with a narrative power that made every word vivid. Pape like Kaufmann brought depth and nobility to his portrayal. 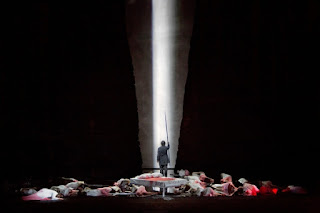 One of the most surprising of performances came from Peter Mattei as Amfortas. Having seen him in the lyric baritone roles, I thought Mattei would not have the sufficient power for Wagner's massive orchestra. However he proved me wrong. When he enters held by his servants he is  injured by his wound but also by his sin. Mattei sings with lyrical beauty and an immaculate tone. His act three monologue in which he asks for death, he is a man of torment, and grief demonstrated by all his lack of movement. He throws himself in Titurel's grave and this alone shows his low point. But once Mattei is healed by Parsifal, Mattei rises with strength. Mattei's overall performance was an achievement and one that will be hard to top in the coming years.

As Kundry, Katarina Dalayman brought an extreme rawness to the role. As a fallen woman she is crazed, distressed and tormented. In act two she begins as a torn women who in her confrontation with Klingsor sings with fierce power. However when she gives into Klingsor's power and is turned into a young seductress, she enters the stage with a youthful appearance and Dalyaman's voice reflects it. She sang with smoothness bringing some sexuality to her voice. However when Parsifal rejects her she turns her voice from that delicacy to a furious tone. She pleads and while the voice has some anger there is also misery. Dalayman's role is short vocally but Girard allows her to be on stage for the remainder of the night. As a aforementioned one of the most beautiful bits is the Good Friday scene as Dalayman washed Kaufmann feet. It was a moment of bliss and Dalayma's sorrow turned to relief. She was literally healed.

As Klingsor Evegeny Nikitin brought a grotesque character to his big bass voice. Runi Brattaberg was a solid and heavenly voice Titurel while Maria Zifchack was solid in the role of A Voice.

My only qualm with the production was conductor Danielle Gatti's slow tempi. He sometimes paused the music and lengthen phrases that could have used more momentum. The horns had some issues as well sounding out of tune at times and then making harsh sounds. But in the end Gatti phrased with beauty, and allowed for a spiritual and sublime experience.

The Met has hit a home run with this Parsifal giving Wagner a wonderful 200th birthday present. It is one of those productions that is a must see and it is by far the most exciting and best new production of the year.
Posted by Unknown at 5:11 PM