Ernani returns to the Met with an all star cast headlined by rising star Angela Meade.


The Production
In 1983 Pier Luigi Samaritani made his debut directing Ernani. The production staged by Samaritani is made up by a group of tableaux vivants behind gauzes, with chiaroscuro lighting of the kind Spanish artists were in process of stealing from the Dutch. Overall the production is huge decorated by an oil painting that is about forty feet wide and wooden doors that look like they come from a cathedral. Peter McClintok has taken over the direction of the production and his fidelity to the text allows the story to flow. The last time the production was shown was 2008 and while it is 28 years old the production still looks refreshing and new. 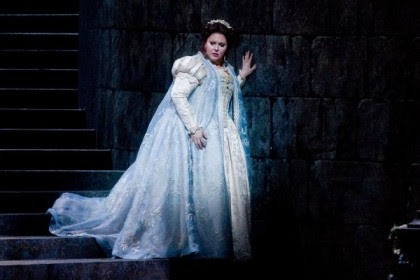 The Cast
Marcello Giordani and Robert De Biasio may be playing the title role this season but the reason for this revival is rising star, soprano Angela Meade. Meade made her unexpected Met debut in 2008, replacing an ill Sondra Radvanovsky, and thrilled audiences in her first professional assignment. Meade who was a winner from the National Council auditions was completely unknown until the movie "The Audition." However she was still under the radar. After her debut, many music festivals started calling her and she was able to make many debuts in other major houses. Since then she has become the star of the Caramoor Festival singing various Normas and Semiramides and she will be alternating with the likes of Anna Netrebko in Anna Bolena this year at the Met. Now the Met brings her back three years later in the role of Elvira. Coincidentally I saw the performance in which she debuted. I remember the audience asking who Meade was and upset about Radvanovksy's cancellation. However at the end of the performance Meade received the biggest ovation and stole the show from Thomas Hampson, Ferruccio Furlanetto and Marcello Giordani. Meade is still a young artist so its hard to say where she will go. Her technique and voice are still in development and her career is yet to fully blossom. However from the performance I saw, her voice is flexible, big, and suitable for both the bel canto and Verdi repertoire.While she is not the best of actresses she is able to command the stage with ease. From this first performance, there is a lot of promise in Meade going into this year's run. Salvatore Licitra was originally scheduled to perform the title role of Ernani at the Met but cancelled without any explanation making it Licitra's second high profile cancellation at the Met. Marcello Giordani, the Met's calling card and Roberto Di Biasio, a young and upcoming tenor will sing the title role. Girodani who will get the HD performance is familiar with the Verdi repertoire and is for the most part a formidable Verdian. Three years ago he sang Ernani to mixed reception. The New York Times stated that Giordani "sounded at one moment like an important tenor and at others like an imperfect work in progress." When Giordani sings in his middle register he is able to phrase beautifully and sound great. However when he goes to his higher register, Giordani has no control and ends up sounding uncomfortable. His breath control is not the strongest, a problem for singers attempting Verdi cabalettas. While my impression of his Ernani was good, I don't think Giordani will ever become a great Ernani. Roberto De Biasio is a young tenor who made his Met debut last season in the role of Gabirele Adorno in Simon Boccanegra. Having only sung for four years prior to this debut he was hailed for his "confidence and muscular tenor." Like Meade he is young and his voice has not completely developed. He still has rough patches and some unevenness to his voice. However, from his debut he looks promising and should make a fine Ernani. Ferruccio Furlanetto returns to the role of Silva, a role he sang three years ago and which has become a staple to his career. Furlanetto was hailed for his complete interpretation and for being committed to the villainous role of Silva. Today's leading Verdi bass Furlanetto has a huge voice that is able to overpower any one of his colleagues. His voice while lush is also vigorous and rich. His stage presence and his acting abilities are like none other. Now in his 60s Furlanetto is able to transmit every emotion the music requires even if he sometimes reverts to shouting and pushing. His voice while not as fresh as in his youth is still amazing. His interpretation of Silva without a doubt will be a complete and great performance this year. Dimitri Hvorostovsky returns to the Met in yet another Verdi role, Don Carlo. Hvorostovsky in recent years has dedicated his career to Verdi. Hvorostovsky, a lyric baritone, is not a natural Verdi baritone. As a result of this, Hvorostovsky has damaged his voice by pushing his way through the music due to the heavy orchestrations and heavy ensembles. The timbre that was once beautiful has become dry and coarse. His breath control is unstable which makes it hard for him to sing many sections. I don't know how well Hvorostovsky will do in this role but I do know that he will struggle when it comes to the strettas and through the heavy ensembles.
Conclusion
Ernani is one of the most beautiful early Verdi operas that deserves a place in the standard repertoire. While this cast is unbalanced it will make for a formidable evening at the Met.