Juan Diego Florez and Diana Damrau return to the Met to dazzle audiences in what should be one of the most satisfying revivals of the season. The Production
John Copley's 1991 production returns to the Met after a disappointing run in 2009. The production's sets are by Beni Montresor and include colored backdrops with canvases that rise and fall to change the scene. The costumes are equally colorful and traditional. Sharon Thomas has taken over the direction of the production and while following most of the original direction she has not added or changed anything. The problem with this is that most of the time the singers are reverted to standing and singing. The result is a production that looks and feels old fashion. As the New York Times stated the production has seen better days. 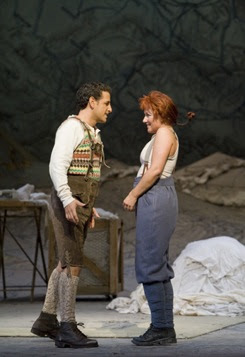 The Cast
The Met brings back the new golden couple Diana Damrau and Juan Diego Florez. Over the past few years Damrau and Florez have captivated audiences around the world in the Bel-Canto repertoire. Their chemistry is great and their comic timing is unbeatable. At the Met they have sung Il Barbiere di Siviglia, La Fille Due Regiment and Le Comte Ory to acclaim. This year they return to revive Copley's traditional production in what should be a refreshing look at Nemorino and Adina's story.

Juan Diego Florez returns to the Met in Donizetti's comic masterpiece. Florez who has sung numerous amount of Bel-Canto roles  has never sung L'Elisir D'Amore at the Met. Nemorino is a role that he has sung to acclaim around the world and has made "Una Furtiva Lagrima" a showstopping aria. Florez has had the opportunity of encoring this aria around the world and hopefully will be allowed to encore the aria if the audience responds well to his singing. Florez has one of the most beautiful and refined voices in opera today. His technique is insuperable and his acting abilities are incredible. Florez utilizes subtly in order to express the desired emotion without ever overacting. Overall Florez gives depth to every character he creates and Nemorino will not be the exception. Its a shame his Nemorino interpretation has yet to be recorded and it will not be at the Met. One only wishes that a theater will eventually record his Nemorino. Diana Damrau makes her Met role debut as Adina, a role she recently sang at the Royal Opera House to critical acclaim. Critic's called her Adina "natural, and flirty." They said that her singing was winning and that her coloratura was perfect." Diana Damrau's singing is controlled and her phrasing vivid creating beautiful lines in the music. As I stated in my Barber of Seville preview, Damrau's voice has grown since the birth of her child. Her coloratura is even more solid and her high notes are more pure than before. With Damrau's charisma, she will create a funny and compelling Adina. Alessandro Corbelli reprises the role of the Dulcamara. Corbelli, a specialist in comedy brings his charisma and acting prowess to this iconic role. Corbelli's technique is able to surf through all the vocal fireworks Donizetti's music requires. In addition his diction is spot on pronouncing every syllable and word written in the score. Corbelli should be an enticing Dulcamara. Mariusz Kwiecien makes yet another comic turn after his highly praised Dr. Malatesta. This year he takes on the role of Belcore, a role he previewed in the 40th Anniversary Gala in 2008. In past years Kwiecien has taken on heavy roles that have not suited his voice and as a result have strained his voice. However last year Kwiecien returned to Malatesta a lyric role that suited him in 2006. He triumphed and critics raved about his gorgeous vocal line and his wit. Belcore should be a good match for Kwiecien as the role is light and generally lies in the same vocal line as Malatesta. With Kwiecien's comedic timing and suave voice, he should be riveting as Belcore.

Here is a preview of Florez's "Una Furtiva Lagrima"

Conclusion
Its a shame that this run of L'Elisir D'Amore won't be part of the Live in HD at the Met as it looks to be one of the hottest tickets this year.