The Production
Last year the Met unveiled The English National Opera's production of Faust replacing Andrei Serban's visually lavish production of Faust. Gelb's reason for replacing a production that had only been shown 13 times was because he wanted a more theatrical Faust. However what he got was an incomprehensible and confusing production. Rather than pleasing the audience with a dazzling, energetic and colorful take on the simple love story, Gelb bored audiences and critics alike. The production which takes place during World War 2 in Faust's laboratory has interesting and diverting sequences as well as interesting lighting effects. However when McAnuff is forced to work with the heavy material, he runs out of ideas and relies on the singers to engage the audience. As an audience member it did not matter how beautiful the singers were singing because I was confused and uninterested by the action. Critics were also not impressed by the work. They stated that "there was something about an atomic bomb, and Faust being a middle aged man with a mid life crisis who actually DRINKS the poison and then suddenly has a flashback because he returns to that moment where he drank the poison and dies as the final curtain comes down. Confused? So was I. McAnuff mentioned a flashback sequence, but only confusion arises from this: in a flashback, someone goes back to their youth, which Faust promptly does after Mephistopheles gives him the potion. However, Faust does not immediately turn young when he drinks the poison. He remains old, and invokes the devil to make him young again and the story proceeds as it normally does. It could have been interpreted that he flashed back when the devil showed up except McAnuff shoots this interpretation in the foot the moment Faust returns to the moment when he drank the poison the first time at the end of the performance." Critics also questioned many aspects of the production including where  Marguerite goes when she dies, Where are those stairs leading her to at the end, Is there a heaven in a universe where Science has presumably become/ destroyed God, and why is the Atomic Bomb concept abandoned after the Walpurgis Night Scene and make no impact on the opera's final scene. The point is the production was unclear and unfocused. Gelb's decision left me never wanting to see another Faust until this production is removed forever from the Met. Piotr Beczala returns to the French repertoire after a groundbreaking turn as Des Greiux in Manon. Bezala, who made his debut in 2006 in the role of the Duke in Rigoletto, came to prominence after his successful Edgardo and since then has returned every year to the Met. For the past two seasons Beczala has sung French repertoire at the Met to great acclaim. As Romeo in Gounod's Romeo et Juliette he gave an ardent and classy portrayal if sometimes a bit restrained. However as Des Grieux he was impassioned, tragic and tortured. His voice was praised for being so well suited for the repertoire and capable of spinning out mezza voce when necessary and  full throated passionate singing. After these two roles Beczala is warmed up for the role of Faust as Gounod's music requires the same type of singing the past two roles. In Chicago he made an impression as Faust particularly in his "Salute demeure" as he was able to sing seamlessly through the long lines with refinement. If he brings that same refinement as he did in Chicago and he brings back the same colors and passion in his voice as he did in Manon he will easily become a memorable Faust. Marina Poplavskaya who made her Met debut in the role of Natasha in War and Peae in 2007, returns to the role of Marguerite. Last year when DesMnuff's production premiered, Poplavskaya replaced the original Angela Gheorghiu and was an instant sensation in the role. Critics praised her for being daring, spontaneous and giving everything on stage. As a singer Poplavskaya is capable of creating penetrating and moving lines. Her middle voice is delicate and refined creating some very beautiful phrases. As an actress she has it all and mesmerizes as she conveys innocence, sweetness, tragedy and passion with such ease. However while she has all these qualities her voice is still a bit unsteady as her her top range and her coloratura can be sloppy, inaccurate and a bit worrisome. As much as she was praised critics noticed that "under the slightest pressure her tone thins, and her pitch goes awry." They even stated that she is musically unsatisfying which I do not agree. Being a young singer Poplavskaya is still developing and perhaps after last years run, she will improve upon last years missteps.While she is not my favorite of Marguerites I believe she is solid if not a great one that should not be missed. John Relyea brings his signature bass back to the Met to sing Mephistopheles. Relyea who debuted at the Met in 2000 in the role of Alidoro in La Cenrentola has for many years been one of the most reliable basses singing many principle roles and has been featured in a number of HD performances. Last year was the first time Relyea missed a season in his 12 year Met career due to illness and as result Faust will be his Met return. Gounod's Mephistopheles will be the first time he sings the role at the Met but his second turn in the role of Mephistopheles. His first appearance was in Berlioz's Damnation of Faust in which he received praise for his large voice and commanding stage presence. His acting skills were satanic in nature and convincing. However after seeing him many times, I have observed that Relyea lacks the suave and smooth voice necessary for the French repertoire. His voice can be hard and rough as and his diction can be cloudy. After Rene Pape's charismatic and enlightening Mephistopheles Relyea has a difficult act to follow that he will most likely not be able to match. Alexy Markov sings his first Valentin at the Met. Markov, an award winning baritone made his Met debut in the role of Prince Andrei in War and Peace in 2007. After his successful debut Markov became a Met favorite singing a variety of repertoire including operas in his native Russian and in Italian. When Markov debuted critics were ecstatic by his promise describing his voice as burnished and honeyed. Critics raved stating that he was compelling, heartbreaking and satisfying. Some even remarked that his voice and style was similar to that of Dimitri Hvorostovsky. The role of Valentin will be his first excursion into the French repertoire at the Met and he will be reunited with Marina Poplavskaya who made her debut along his side. With his suave and silvery tone and his great acting skills, Markov's Valentin should easily be one not to miss. French-Armenian conductor Alain Altinoglu returns to the podium for a second run of Faust. Altinoglu who made his debut in 2010 in Carmen, did not fair well last year as he was compared to the Yannick Nezet-Seguin's interpretation of the piece. Critics said that while his conducting was solid and well paced  he lacked that irresistible sweep that Nezet-Seguin gave in his performances. However such was not the case when he debuted at the Met in Carmen where critics raved and stated that he was very attentive to the singers and led  a stylish performance. This year Altinoglu will have the chance to redeem his conducting of Faust as he will not have to live up to anyone or provoke any comparisons. 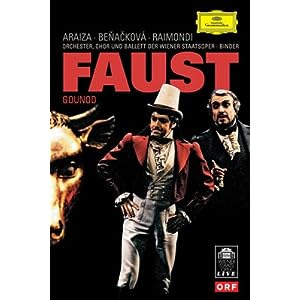 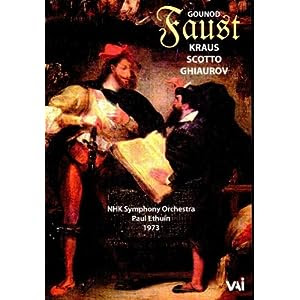 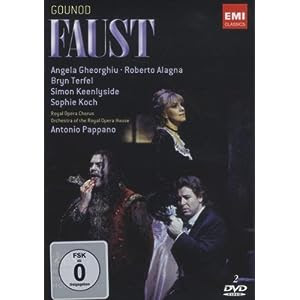 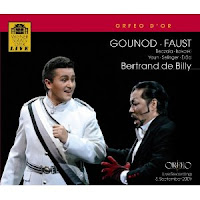 The following three DVDs represent the few recording that are available of Faust. The first one boasts the outstanding performance by Mexican tenor Francisco Araiza with Ruggero Raimondi from the Vienna Stattsoper. The second is a historical performance from Tokyo with Renata Scotto, Alfredo Kraus and Nicolai Ghaurov. The performance is released by Vai and while it has Japanese engraved in, the performance is one of greatest achievements in the history of opera.The EMI release features the real life couple Robert Alagna and Angela Gheorghiu and the terrific Bryn Terfel. The production by David McVicar is one of his best to date and the performance features the complete ballet which is rarely performed. Finally the last is a CD performance that feature Beczala's refined interpretation from Vienna. The performance from 2008 features Beczala at his best with an expressive and warm tone.