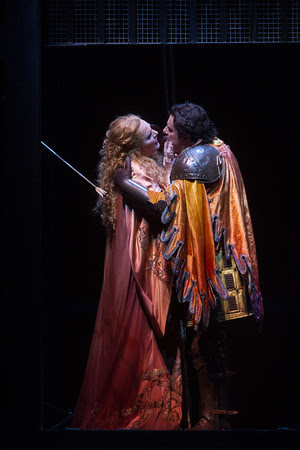 Its been over 25 years since the Metropolitan Opera presented Zadonai's opera Francesca da Rimini. The opera based on Dante's Inferno was first brought to the Met in 1916 and only returned in 1984 and 1986 with Placido Domingo and Renata Scotto in the title role.

The amount of time it took to revive is no surprise as the work as a whole is difficult vocally  and the music is  demanding for the audience as it is spare on melodies. However there are some great moments such as the conclusion to the first act where the cello plays the lushes love theme which is then repeated at the end of the third act when Francesca and Paolo read the Lancelot and Guinevere story. Another great moment in the score is Malatestino and Giovanni's duet. While the music lacks any clear melodies, the way Zadonai contrasts Malestino's comic sardonic character and Giovanni's anger is brillant. Malatestinos music is represented by light winds while Giovanni's music uses the orchestra's brass and full string section. The final duet is also a highlight as the music brings out Francesca and Paolo's desires. It is no longer restrained and subtle, it is explosive with swelling violins and ends in a climatic verismo style with the two singers going to the top of their ranges. It is one of the most passionate moments in the entire opera.

While there are these brilliant moments Zadonai takes too long with generic characters such as in the third act when he takes twenty minutes on spring songs that do not move the plot forward. He could have used a more extensive love duet in that act. The other issue is the work ends up being a bit to cold and its hard to actually connect with it. However it is still an opera that definitely deserves more performances and one that should be exposed to the public.

For the evenings preceeding the Met lined up a fordmidable cast if not the A list cast that was Scotto and Domingo back in 84.

Taking the title role was Dutch soprano Eva Maria Westbroek. Westbroek sang her first Francesca in Monte Carlo and demonstrated her dominance over the role. The role calls for the soprano to sing through a powerful orchestra and use her whole vocal range. Westbroek sang with delicacy and  beautiful pianissimi during her third act duet and in the first act her high notes floated effortlessly. Her best singing came in the fourth act where Westbroek's powerful voice came to full display. During her mad scene at the beginning of the act where she wakes up to bad dreams, she phrased with staccato singing displaying the unnerving character of the music. Once her Paolo entered for the final duet each phrase was shaped with a sensual character and she built it to the climatic final notes. Yet for all vocal merits, I did not feel her character whatsoever and it was due to the lack of chemistry with Giordani. She acted and moved perfectly through the role but a better partner would have enhance her performance. Westbroek is an artist the Met deserves and it is a shame that New York audiences won't see her next year. 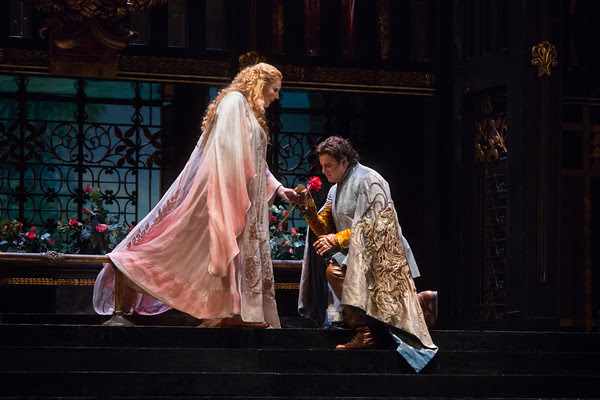 Marcello Giordani had a good night for his standards. After the disastrous Enee in Les Troyens, I will admit I had my reservations on what I would hear on this night. However the moment Giordani stepped out he sounded secure and sang with ardor. His middle voice was stable and his high range did not sound forced for a change. His voice also seemed to have gotten bigger. However there is clear evidence that it is an old voice  that is wearing out as there were some pitch issues and a few moments of wide wobbly vibrato. His low range was also unstable during his semi aria in act 3. Each time he went to the bottom range it sounded as if he could not breath and had a raspy quality that was ugly and did not fit the character. But these qualities did not ruin his powerful entrance or his soft phrases during the act three duet. His climatic high note at the end of the last act was also powerful and his incandescent passionate singing during his final duet outweighed the negatives in his performance.

For all the good singing from the principals it was Mark Delavan who stole the show in the role of Giovanni Malatesta. His booming bass-baritone has grown since his last appearance on the Met stage in 2008. For his confrontation seen with his brother Malatestino, Delavan's gruff voice was beaming with power expressing the anger in him. Robert Brubaker also showed off his comic tenor with bright high notes and a rough tone which added to his deformed character. 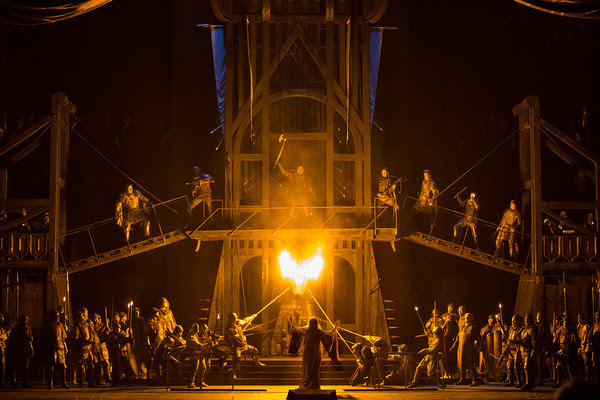 In the pit Marco Armiliato took control of the difficult orchestration always following the singer in every moment. As aforementioned one of the most incredible moments was the finale of act 1 with the solo cellist. Jerry Grossman embellished his playing with gorgeous portamenti that made the cello blend with the chorus and gave a human voice quality.

Piero Faggioni's marvelous production continues to look and bring the epic qualities to Zadonai's opera. The sets are traditional with huge sets and lavish gowns and drapery. There is a vivid tower in the second act, a courtyard in the first and Francesca's room with her bed in the middle. The final scene sees the backstage walls open with smoke representing the gates of hell. It is a production that symmetrical throughout. It was a shame though that the Met put us through three intermissions making the evening a bit longer than it should have been.

As great as the evening was vocally, it is a shame the Met audience is too closed minded  as the theater was half full by the time the performance ended. It was also a shame to see the performers receive such tepid reception at their curtain calls.