Anna Netrebko brings her acclaimed Anna Bolena to the Met for the first time.


The Production
The production by David McVicar is the first production of Anna Bolena at the Met. When Rudolph Bing was general manager at the Met Maria Callas proposed to make a production of Bolena for her. However Bing immediately shrugged it off and stated that he was not about to put a boring show at the Met. Callas' plans of performing the role quickly dissipated. Since then many sopranos have taken on the role but the Met's general managers have not taken the opera seriously. When Peter Gelb stepped into the position he vied to expand the already large repertoire. He signed a contract with David McVicar to direct all three Donizetti queens, Anna Bolena, Roberto Devereux, and Maria Stuarda. He also had plans for Anna Netrebko to sing all three roles. However Netrebko decided to only take on Anna Bolena as she felt her voice was not right for the other two roles.

McVicar who is a versatile director is known for staging his productions in traditional settings. However he always adds a minimalist taste to the production. His sets are spare and crude. His color palettes are always made of dark grays and beige and he rarely ever uses bright colors. This will be his first staging of this opera and after a huge success in Il Trovatore, McVicar is bound to please the Met audience. 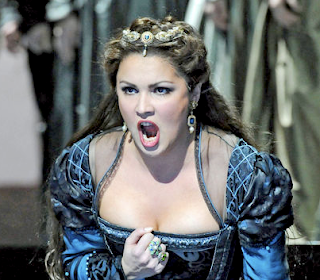 The Cast
Anna Netrebko takes the role of Anna Bolena for the first time at the Met. Last year she dazzled audiences in another Donizetti role, Norina in Don Pasquale. She was hailed for her comic timing and her spectacular vocals. However this year she goes from a light role to Anna Bolena, a role many have considered as difficult or even more difficult than Norma. Netrebko has the challenge of singing the role in the Met premiere and following in the footsteps of greats like la Callas. Anna Bolena became part of the soprano repertoire after Maria Callas premiered it at La Scala di Milan. Since then the role has become a staple in the coloratura canon. Great sopranos have been compared to the incomparable Callas and with a doubt Ms. Netrebko will be also. In April, Netrebko made her role debut in Vienna to successful reviews. Critics called her interpretation her greatest success since the 2005 Salzburg Traviata. Opera News said that her interpretation of Anna Bolena brought her closer to becoming the "Diva assoluta del mondo." However they did note that Netrebko still has a lot of work to do with the role. Critics complained that her phrasing while beautiful was too safe and therefore lacked the emotion that Bolena needs. In addition critics also stated that she was disciplined, pretty and accurate. Its hard to think these are complaints but Netrebko is known for being charismatic and wild on stage. She lets go in some of the most dramatic roles as well as the comic roles. While her first outing was a success, singing at the Met in an iconic role is a daunting task. Netrebko will have to get more comfortable with the role letting go of the discipline and instead creating a more three dimensional character. Fortunately Netrebko is blessed with a huge instrument that fills the hall easily and is able to convey a wide range of emotions. Since her pregnancy Netrebko's voice has become darker and her lower notes have become richer. Her technique has become even more solid but her high notes have become weaker. Quickly Netrebko is going from a lyric to a spinto. As a result Netrebko is able to sing the role of Anna Bolena without having to bring the role an octave higher as most sopranos have done in the past. Its hard to ignore why Netrebko is one of today's most sought out singers. She is glamorous and charismatic, making her a perfect fit for Bolena. However she will have to improve upon her first performances in order to make her mark on this role.

Ekaterina Gubanova replaces the beloved Elina Garanca in the role of Jane Syemour. Gubanova who
made her role debut as Eboli in the Met Japan tour takes on a role which in my opinion is too light for voice. Gubanova, whose voice is dark and heavy has sang Fricka and numerous dramatic roles to success. However she has not fared well in the lighter fare. In 2009 when Gubanova sang the role of Giuletta in L'Contes d'Hoffman critics called her singing stilted and uneven. Giuletta which is a short role is lower in range then Seymour. Seymour requires many high notes, stability and lots of coloratura. Gubanova is not known for her Bel canto interpretations and as a result it is hard to imagine what her Seymour could sound like.

Ildar Abdrazakov joins the cast as Enrico, making his role debut. Having already plenty of bel canto roles under his belt, Abdrazakov should make a great Enrico. As I noted in my Khovanschina preview, an opera he sings later this season, Abdrazakov has a dark hued bass which allows him to sing lyrically, an important element for the bel canto repertoire. Abdrazakov who is a wonderful actor will also be able to  show the many facets of Enrico making him both compassionate and perverse. In addition, this production will reunite Abdrazakov and Netrebko on stage. It will be pleasant to see the their wonderful chemistry onstage since their appearance together in Lucia di Lammermoor.

Steven Costello gets the opportunity to shine in the role of Percy as well as an opportunity to become a star at the Met. Its been years since Costello is billed in a leading role at the Met. The Last time he sang in a leading role was in Lucia di Lammermoor along with Annick Massis. Costello who made his debut in an opening night at the Met in the role of Arturo in Lucia di Lammermoor has the challenge of taking the first production of Anna Bolena. Costello whose timbre is light and frail should make for an elegant Percy.

Conclusion
This will be a challenge for the whole cast as Netrebko will have to prove if she is really capable of taking on heavier roles and Costello will finally get the opportunity to show if he has what it takes to be a leading opera star. Abdrazakov and Gubanova have the challenge solidifying their status at the Met. In addition because this is the first production of Anna Bolena, it will be interesting if this opera will stick with audiences and finally be part of the standard repertoire.

This is the first live in HD presentation at the Met this year.
Posted by Unknown at 7:04 PM