Anna Netrebko at the Met

Over the past ten seasons Anna Netrebko has lured audiences with her charisma and beauty. She has had five HD performances of which three were released on DVD by Deutsche Grammophon.This year as Netrebko returns to headline the Opening Night gala at the Met and two HD performances. Before the Met season opens I would like to take a look at Netrebko's trajectory. Netrebko made her Met Debut in the role of Natasha in War and Peace, a performance that immortalized her in the role and that opened the door for her to sing regularly at the Met and other great theaters. However she was far from becoming a superstar. A year later Netrebko returned to sing the role of Zerlina, a role I was fortunate enough to see. She was memorizing and unforgettable in a role that would generally not be a standout. In 2004 she would sing Musetta in La Boheme, stealing the show from the principals. In the 2005-2006 Netrebko's big break came as she took on the roles of Gilda in Rigoletto with Rolando Villazon and Norina in Don Pasquale. In Rigoletto Netrebko and Villazon solidified their status as the golden couple of Opera and in Don Pasquale Netrebko solidified herself as the star of the Metropolitan Opera. In 2007 she would return in the roles of Mimi in La Boheme, Elvira in I Puritani and the 40th Anniversary Gala. Villazon and Netrebko once again dazzled in an exclusive one night performance of La Boheme that was sold out in hours and where legendary tenor Placido Domingo was booed for his conducting. In I Puritani, her first HD, (Below) Netrebko surprised audiences during the mad scene when she lied on her back and her head and arms dangled over the edge of the orchestra pit. Though Netrebko's Elvira lacked the discipline in the Coloratura runs and high notes, Netrebko demonstrated that she could carry an opera on her own. The 40th Anniversary Gala once again joined Villazon and Netrebko in an unforgettable evening of selections for La Boheme, Manon and L'Elisir D'Amore.

In 2008 Netrebko finally conquered the critics as she astounded critics for her tragic but youthful portrayal of Juliette in Romeo et Juliette (Below). Her poison scene was the most memorable of the scenes as she demonstrated her capacities as a dramatic actress. In this run she had four Romeos, Roberto Alagna, Joesph Kaiser, Marcello Giordani and Matthew Polenzani all replacing Rolando Villazon.

In 2008-2009 Netrebko surprised audiences with her pregnancy and as a result she canceled her first run of a highly anticipated Lucia di Lammermoor and La Boheme. In Februrary 2009 she returned to the Met to what may be her most controversial performances at the Met. Netrebko was to prepare a new cadenza written for her by Phillip Gosset but opted out as her voice was no longer the lyric coloratura everyone knew. Her voice had become darker and heavier. In addition Netrebko and Villazon had never rehearsed the opera so the opening night would be a more or less a rehearsal. On Opening night Netrebko returned with her frequent on stage partner Rolando Villazon to a very disappointing performance of Lucia di Lammermoor (below) that was met with criticism. Critics noted that Netrebko's high notes were flat and her acting was too discipline and calm. In addition, they noted that her singing lacked any charisma audiences were used to. Villazon cracked during the sextet at the end of act two and as a result cancelled the last two performances. This would be the last time Villazon and Netrebko would ever sing together. Giuseppe Filianoti and Piotr Beczala would take over the run.

A year later in 2009-2010 Netrebko would sing Antonia in L'Contes d'Hoffman and Mimi in La Boheme. Netrebko who was originally scheduled to sing all four heroines opted out of Giuletta and Olympia. She only sang Antonia (below) and Stella. Her Antonia was hailed by critics but I still found her singing lackluster and unusually stilted and uneven. Still she returned back to form in the acting department. However her Mimi in La Boheme originally scheduled with Villazon proved to be one of the highlights of the season. Her lush voice proved well suited for the role and her acting was exceptional.

Last year Netrebko originally scheduled to sing La Traviata and Don Pasquale opted out of Traviata because she believed the production was too specific and she did not want to compete with her Salzburg performance. However she returned to the role that made her a star at the Met, Norina in Don Pasquale (Below). She once again dazzled audiences with her comic timing and beautiful phrasing. Though many complained that her voice is not well suited for this role, Netrebko proved that she was more than up to the task.

Ten years have passed and this year she will add two more roles to her Met repertoire, Anna Bolena and Manon. Deustche Grammphon celebrates her tenth anniversary with a new CD entitled "Live from the Met" with some never before released selections from her Met performances. 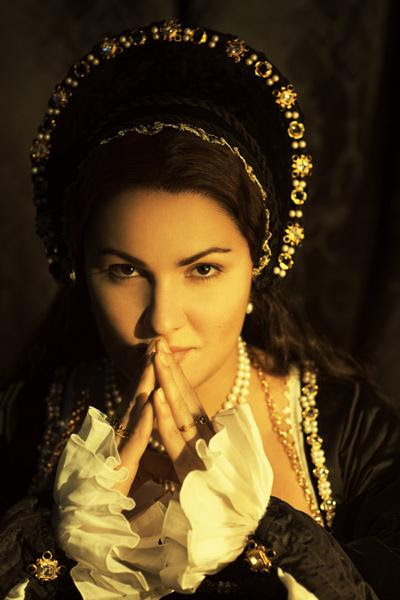 I will release my preview of Anna Bolena shortly after this retrospective.
Posted by Unknown at 9:05 AM