The Production
Last year when the Met announced that they were doing a new production to the L'Elisir d'Amore I was ecstatic that they would finally get rid of the 1991 John Copley production. I have never been a fan of the colorful and cheerful sets nor the clumsy and hokey costumes. However after seeing it with a cast with the likes of Juan Diego Florez, Diana Damrau, Mariusz Kwiecien and Alessandro Corbelli, I had realized that it wasn't the production that bored me, it was the lack of energy that was produced on stage. After April's performances of the work, I was sad that I would never see this production or such cast again. Additionally I was upset that the Met had not made an HD for it. Therefore when the programs for the new season arrived I was honestly not thrilled by the casting or the decision of a new production to open the season. Originally the season was supposed to open with a new production of Eugene Onegin but was moved to 2013-2014. The 2013-2014 season was supposed to open with a new production of La Boheme but was cancelled after the Tosca fiasco in 2009. As a result Gelb had to come up with a quick change and what he decided was a new L'Elisir since he already disliked the current production. Bartlet Sher who has been great with comedy in his two Met productions of Le Comte Ory and Il Barbiere di Siviglia was hired. For his concept, Sher decided to research, Donizetti's old sketches to see what the original intention was. as a result for the new production he has decided to use backdrops and John Copley style flats. Based on the pictures of the production, it looks like a combination of the Vienna Schenk production and the Copley production using brown for most of his sets and vibrant colors for his costumes. This will most likely be good as it will bring in all the traditional minded folks into the house and there will be no boos on opening night. However the question that comes into play is where does Peter Gelb's revolutionary modo come into play if this new production looks and breathes the same air as the older generation productions Gelb is trying to get rid of. While I think I will enjoy this production I have a feeling I will be disappointed by the casting and by the safeness. However I may be wrong.
This production will be part of the HD transmission. 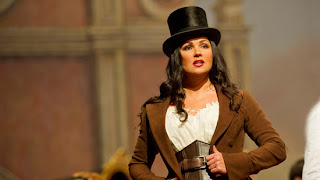 Anna Netrebko opens the season for the second time in a row. Netrebko will sing her first complete Adina at the Met after previewing it during the 40th anniversary gala in 2007 and singing the role to acclaim throughout the world. Netrebko who made her debut in 2002 as Natasha in War Peace has steadily showed off her vast repertoire with some great results and some mixed. Last year Netrebko opened the season with Anna Bolena an iconic soprano role that marked a change in her career. It seemed like she would be moving into heavier repertoire. However of late she has decided to stay in the lighter lyric repertoire with excursions into La Boheme in Salzburg and now with Adina in L'Elsir d'Amore at the Met. While her voice is still one of a lyric sopranos it will be interesting to see if she still has the lighter qualities necessary for the role. Two years ago when she sang Norina in Don Pasquale, she received raves for her comic timing and musicality. However some critics were not impressed as they expected a lighter more bird like voice. They also criticized her coloratura runs as they have never been the cleanest. Nevertheless Netrebko seems like she is up to the task of singing a role she considered one of her favorites and one of her easier roles. Not to mention she has worked with two of her co-stars so chemistry will definitely not be missing. Whether or not she receives mixed reviews Netrebko will most likely thrill audiences with her vivid and charismatic reading of Adina. This will be Netrebko's 8th HD transmission.

Matthew Polenzani sings his first Nemorino at the Met. Polenzani made his debut in 1997 as Krushchov in Boris Godunov and steadily grew from a comprimario tenor to a leading tenor at the Met. He has always kept his voice in the light lyric range and that has suited him well throughout his career as it has brought successes in roles such as Don Giovanni and Don Pasquale. His voice has been described as handsome and polished and italianate in style. In his last excursion into Donizetti at the Met in Don Pasquale, he received raves for his passionate and dramatic vocal line. However critics missed the spontaneity of Juan Diego Florez's turn in the opening of the production back in 2006. Oddly enough Polenzani will proceed Florez again in this Elisir. While Polenzani is not singing the same production its hard to forget Florez's turn last year as Nemorino. Polenzani misses many marks with his acting as he is very still and at time looks lost confused or odd on stage. Just watch last years HD of La Traviata where Polenzani while vocally immaculate lacked the energy and physicality necessary for the Decker production. Unfortunately Nemorino is a very active role that requires both vocal beauty as well as charm and charisma. I'm not saying that Polenzani will be a bad one. No I believe he will sing the role to perfection and make many audiences remember the golden age they long. This will be Polenzani's fourth HD.

Mariusz Kwiecien repeats his acclaimed Belcore after receiving raves. Kwiecien made his debut as Kuligin in Kata Kabanova in 1999 and ever since he became a Met favorite. Kwiecien has proved over and over that he is great in comedy. First he sang the role of Malatesta in Don Pasquale where together with Ms. Netrebko, stole the show. Critics raved about his vocal line and his agility as well as his comic timing. It also helped that he had very good chemistry with his colleagues. And last year in L'Elisir d'Amore he sealed the deal. He proved that his best roles are his comic one as critics called him dashing and confident. He commanded the stage with ease and critics even noticed that he was clearly having fun. Thankfully this time he will be recorded in HD for his fourth HD appearance. With Netrebko back at his side and with a new production it will be interesting to see how Kwiecien's incredible Belcore changes in a year.

Ambrogio Maestri brings his signature Dulcamara to the Met. Maestri made his debut in the role of Amonasro in Aida in 2004 and immediately returned in 2006 for Cavalleria Rusticana. However 6 years have passed and the Met has not seen his presence. He however has enjoyed acclaim in Europe with his comic Falstaff becoming one of the great exponents of today.  Additionally he has enjoyed acclaim for the role of Dulcamara, a role he has been singing more often at the Bayerishe. Of those performances critics noted that "he seemed to be having fun on stage. The result was so infectious that the enjoyment transferred easily to the audience." They also noted that even though he is not quite the "paradigm of a basso buffo, he does a fine job." They added that his voice is in healthier state that most who portray the character. It will be interesting to finally see this singer in a comic role at the Met and to see how his voice has changed over the ages. This will be Maestri's first HD.

Maurizio Benini returns to the opera that he made his debut in, in 1998. As a conductor he will have the biggest task of the year and his career as he will have to open the season. In the past only the principal conductor or music director had the task but because of health and other committments neither Luisi no Levine will be conducting. Throughout his Met career, Benini has enjoyed a career in Italian opera particularly the Bel Canto repertoire. Benini has been hailed for his strong readings in the repertoire and for his urgency and vibrancy. Additionally he has lead potent productions and incredible HDs including Le Comte Ory, and La Cenrentola. The last time he lead L'Elisir in 2009, he was the best thing about the production as he brought all the energy and spontaneity to the evening which was lacked on stage. With a better cast and a new production Benini is sure to be exceptional.