The Production
Franco Zeffirelli's critically abhorred production returns to the Met. Ever since the Met premiered the Zeffirelli production critics have complained for his excess and for the grand scale. They have stated that the big sets take away from the action and do not let the singers shine through. Nevertheless the production has been one of the audiences favorites as the sets are rich with detail bringing the audience to the world where the action takes place. The costumes are also striking and with great actors such as this years cast, the characters are easily brought to life without any distractions. Peter Gelb has stated in various interviews that there are no plans of changing the set and I applaud him for it. Zeffirelli's Turandot is a spectacle that is is easily one of the Met's finest productions to date. 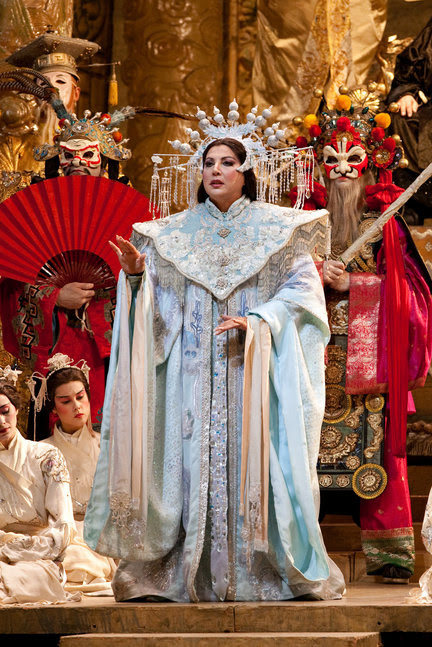 Maria Guleghina returns to her signature role of the icy princess Turandot. Guleghina who made her Met debut as Maddalena in Andrea Chenier, has become one the great superstars in the world of opera. Her acting skills as well her imposing and large voice have marveled audiences and critics around. Last year as Abagaille she sang with delicacy as well as with beautiful pianissimi and heft. Her acting was filled with physicality and wonderful interactions with her colleagues. As Turandot, Guleghina has become one of the major exponents of the work singing it throughout the world. In 2009 when she sang the role critics were mixed with her performance, complaining about her high notes and her steely, harsh and wobbly sound. Critics stated that she pushed on her high notes and that

the tone could easily become shrill. However they praised her for her beautiful pianissmo singing as she phrased with tenderness and expressiveness. Critics also expressed their amazement as her voice soared through the huge orchestra without any effort. There will most likely be mixed reception this year when she opens the run. Critics will most likely complain about the same things but one thing is for sure, Guleghina will be riveting and ultimately one of the most complex and complete Turandot's to step on the stage of the Met. 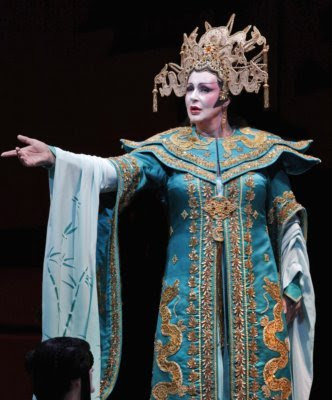 Irene Theorin brings her Turandot after an acclaimed run in San Francisco.Theorin made her Met debut in 2009 on a last minute replacement in Die Walkure as Brunhilde. Being at the performance Theorin was riveting as she sang the difficult music effortlessly and acted the role out with ease. Her moments with James Morris as Wotan were heartbreaking as she showed vulnerability and fear. The audience responded with a standing ovation. Critics however complained as they stated that she sounded unsettled and called her tone acidic. They said that she improved throughout the night but that her sound was a bit undersized for the theater. This is perhaps the reason why such a talented artist has not returned to the Met until now. Last year Theorin opened the San Francisco opera season with a bang. Critics stated that she was a reminder of how alluring the role of the icy princess could be. They stated that she had a vocally rounded and dramatically expressive
performance. They also said that she was compelling and that she was able to balance tenderness and power very well. If last years performances are an indication of what we should expect, then Irene Theorin will be a hit as Turandot as she was in Walkure. Marco Berti sings his first Calaf at the Met. Having debuted at in 2004 as Pinkerton in Madama Butterfly, Berti has dominated the Puccini and Verdi repertoire to minimal success. As I stated in my Trovatore preview, Berti is a singer who possesses the perfect Italianate voice but lacks the depth, technical proficiency and refined phrasing that the great Italian tenors had. However, for his first Calaf at the Met, Berti has an upper hand as he comes off a huge success in San Francisco last year.  Critics hailed him for his muscular tone and his vital and thrilling vocalism. However they complained about his lack of movement and his stiffness on stage. They complained about the fact that his back was always turned away from the audience and therefore there was no intimacy. Of course that is the stage directors decision but Berti is has never been none for his acting. While he may sing as beautifully as he did in San Francisco, he may have problems communicating to the audience and may have difficulty portraying the complexities of Calaf. 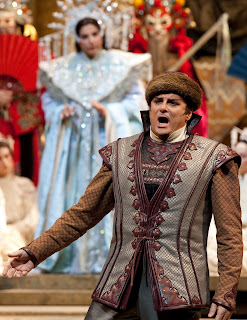 Marcello Giordani brings his austere voice yet again to the role of Calaf. After making his Met debut in 1995 as Rodolfo in La Boheme, Giordani has returned to the Met expanding his repertoire in diverse roles. However he has also become one of the most inconsistent singers of our time and one of Gelb's favorites. Giordani who is naturally a lyric tenor has forced his voice into the dramatic repertoire damaging stability and killing his high notes as well as his low notes. As I stated in Les Troyens preview, Giordani's issue is that he sings too much repertoire without focus. One day he sings Aida and the next he sings Ernani. This year Giordani will take on Aeneas in Les Troyens as well as Paolo in Francesca da Rimini and Calaf. All these roles are for different voice types and therefore can end up killing a singers voice. When he sang Calaf in 2009 critics were unhappy with his unevenness. They stated that he sang one moment with plush phrases and ringing high notes and another with no low voice as well as uncontrolled tone and phrases. While Giordani may give it his best, it is about time Giordani concentrate on a specific repertoire as this Calaf will be just as uneven as most of his roles.

Hibla Germava continues to expand her Met repertoire with Liu. Having made her Met debut in 2010 as Antonia in Les Contes d'Hoffman to great reviews, Gerzmava became one of the rising  star sopranos to look out for. One expected that the Met would put her in top billing for last years Boheme. However she went unnoticed and performed in the second cast. Of her performances, critics were suprisingly unenthusiastic. They said that her characterization was more about sounding beautiful than bringing any dramatic dynamic to the role. Additionally they complained about her sometimes intrusive vibrato. Altogether the run was the opposite of her Met debut. Luckily this year Ms. Gerzmava has the opening of Turandot and critics and audiences will be there in masses. As a fan of her voice I believe Gerzmava has what it takes to be a powerful and devastating Liu this year. 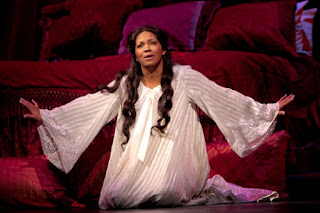 Janai Brugger makes her Met debut as Liu replacing Takesha Meshe Kizart. Brugger, unknown to the opera world recently won the National Council Auditions, and the the Operalia Competition. She also recently made her Los Angeles and Chicago debuts to great success. Of her lyric voice critics have raved about her warm tone, her stage command and vocal control. Brugger has a big test on her hands but if she impresses she may be the next Angela Meade or Latonia Moore. Veteran bass Samuel Ramey reprises the role of Timur. Since making his Met debut in 1984 as Argante in Rinaldo, Ramey established himself as one of the greatest Rossini basses of all time and a great Verdi bass. Time has passed and while his voice has become wobbly and sometimes rough on the ear, Ramey is still a compelling performer. When he sang Timur in 2009 critics  stated that he brought grave dignity to the character and showed great authority even if at times he wobbled a bit. With his great stage presence, Ramey is sure to resonate with audiences and critics alike. James Morris sings his first Timur. Since making his Met debut in 1971 as the King in Aida, Morris became one of the most important Wotan's in the history of the Met. In recent years Morris has retired the role and went on to explore diverse repertoire. Last year he sang a commanding Claggart in Billy Budd, Ramfis in Aida and il Commendatore in Don Giovanni. He sang to acclaim obtaining standing ovations. While his voice is no longer as potent as it used be Morris' technique is still intact allowing him to produce a powerhouse sound that it unheard of in most young singers. In recent years critics have raved about him calling him chilling, and unnerving. While he has yet to sing the role of Timur, Morris is sure make it something special.

Dan Ettinger returns to the podium after a successful Met debut in 2009. Ettinger who is internationally recognized as one of the young talents in the classical world and was recently named music director of the Isreal Philharmonic, the Nationaltheater in Mannheim and the chief conductor of the Tokyo Philharmonic. He is known for his vast repertoire and for leading acclaimed performances of the Ring Cycle as well as Tosca and Carmen. When he lead the Met Orchestra in Le Nozze di Figaro critics applauded him for bringing a robust, finely polished color to the orchestra. He was also admired for his energetic tempos and his pacing. One can only expect the same energy as lead his first Turandot's this season at the Met. 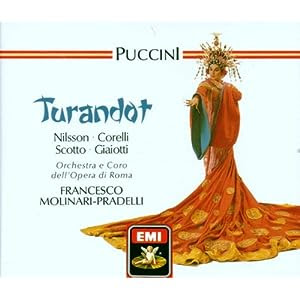 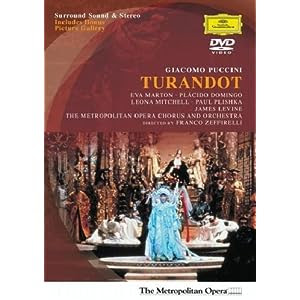 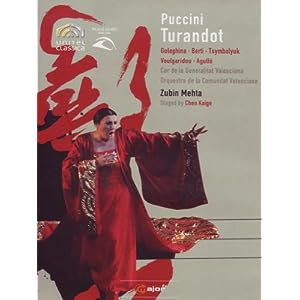 Turandot is one of the most popular works in the opera canon and therefore it is hard to pick the best recordings. However these are some of my favorites. The first is the legendary recording with my all time favorite interpreter Birgit Nilsson. It also features a great Corelli and a youthful Scotto. The next is the great Met performance with Eva Marton and Placido Domingo. Leona Mitchell is also featured in a showstopping performance as Liu. The next features an all star cast which includes Eva Marton, Jose Carerras and Katia Ricciarelli. The legendary performance also features Lorin Maazel in the Pit. The next three all feature Maria Guleghina. The first is her role debut in Valencia under Zubin Mehta. That one being my favorite. The next is from the Met and features Marcello Girodani and a scene stealing Marina Poplavskaya. Finally the last is a gem as it reunited Guleghina and Salvatore Licitra. The two had great chemistry together and is one to own. Last but not least is Maria Callas' version. The recording is unique and as always chilling. 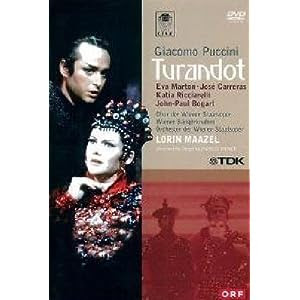 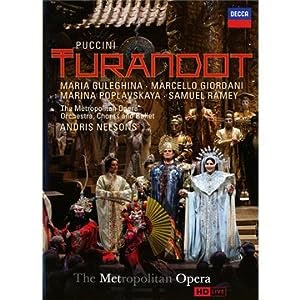 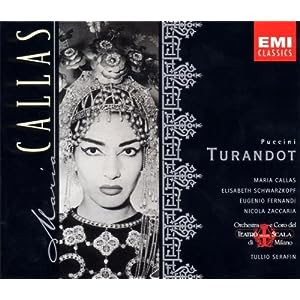 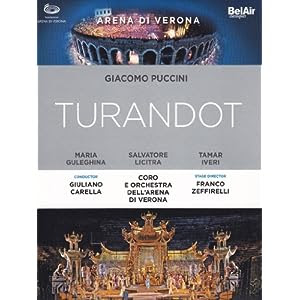