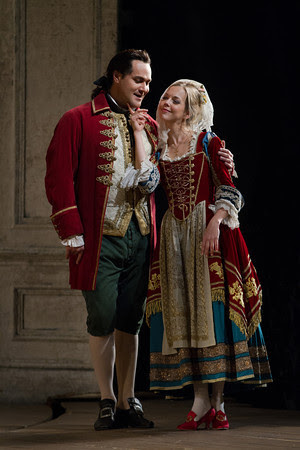 I would like to preface this review by stating that I was present at the opening night week ago, but due to the extenuating circumstances created by Hurricane Sandy I was unable to find the time, or computer to pull it off until this morning. I would also like to extend my best wishes to those affected by the hurricane and hope that they are undergoing a full recovery as soon as possible.

I have always felt that a Mozart opera does not work unless it is well sung and well staged. Most would argue that this is the case with any opera, but for me Mozart’s work demand all its players to step up their game all the more significantly. This case could not be more evident than in an opera such as Nozze di Figaro where a flat staging and poor acting can make the complex drama slow and mundane.

Fortunately, the Met Opera has chosen a strong cast and adequate director for the proceedings. While I did find a few flaws in the way the opera was put together, I can not help but feel satisfied by how the evening went. I usually refrain from mentioning other critics, but I could not help but notice how loathing they were toward stage director Gregory Keller’s revival of Jonathon Miller’s production. Keller had a few rough patches here and there, but I found his direction sufficient and compelling at times. This Nozze was surely filled with sexual innuendo, then again isn’t that the main thrust of the opera’s conflict? Those complaining that Keller cares little for the ambiguity of the work should take a look at his final direction after the Countess forgives the Count and they prepare for a reconciliatory kiss. It is a moment of pure tension and the fact that he never gives us the cathartic release suggests deeper issues in this marriage.

To suggest this was a perfect directorial turn would be wrong. During Cherubino’s escape in Act 2, Mojca Ermann’s Susanna and Christine Schafer’s Cherubino stood frozen on stage looking quite uncomfortable. It took a great deal of energy from the proceedings and looked rather under rehearsed. Aside from that I did not really experience any overwhelmingly poor choices that would degenerate Mozart’s great opera to vulgarity. Susanna and Marcellina engage in a cat fight to end the second Act, but I think it was comic in execution. I was also thrilled at the choice to cut the Act 4 arias of Basilio and Marcellina as it helped move the drama forward rather than killing its momentum.

Ildar Abdrazakov was a standout in the title role of Figaro. He carried a rather calm swagger about him and looked like the innocent well-meaning good guy at all times. As the opera progressed, his Figaro started becoming more of a child as he would jump into his mother’s lap or jump at her feet upon hearing of Susanna’s infidelity. He sang with lush tone that rang through the theater. His final aria in which he sings of woman’s infidelity showed off the clarity in his lower range. After watching his uninspired turn last season in Anna Bolena I was happy to him back at top form in Nozze.

Mojca Erdmann draws the ire of the critics for no good reason in my opinion. She has a sweet voice that also has great volume and depth. Throw in her solid acting skills and this is the complete package that every opera house is currently clamoring for. She can sound a bit pitchy in her upper range, but the elegance with which she sings (particularly in her seductive final aria) really made her a formidable Susanna. Her commanding stage presence (save for the aforementioned awkward moment) made her the center of the performance for long stretches.

Gerald Finley is one of the top Mozartians out there. I was a bit surprised that his voice was not as large as I imagined, but his singing was confident and passionate all the same. He also had a confident swagger about him that really gave his Count power. As the opera drew to a close he sang the glorious lines “Perdona Contessa” with a heart wrenching pianissimo that was easily one of the highlights of the night. The warmth he emanated easily exhibited one of the more sincere emotional moments in the score and of the night. 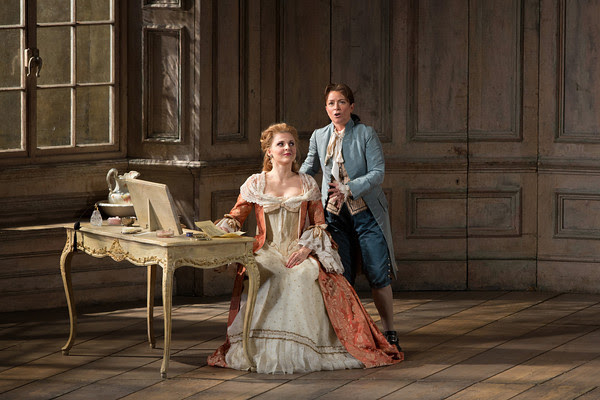 His Countess was a strong Maija Kovalevska who sang with a gorgeous full sound that has a dark edge to it. She seemed to have some tempo issues in her arias, particularly her second one “Dove Sono,” but she eased into it and delivered fluid singing that rang of emotional depth. Her Countess tended to be more on the girly side, almost as if she was releasing her suppressed impulses as she teamed up with Susanna to save her marriage. It might have been a bit much at times, but it certainly added to the complexity of the character. Her final moments in which she forgives Finley’s count matched the splendor of his warmth and sincerity vocally.

Christine Schafer had a magnificent night as Cherubino. She may not have a massive voice, but her singing is smooth and nuanced. I was particularly blown away by her decision to sing the “Voi che sapete” piano (soft) the second time around. But it matched the increasing intensity of the moment as Schafer’s Cherubino slowly inched toward his desire object of affection: the Countess. It was riveting rendition and easily of the standout performances of the evening.

The other cast members (Maurizio Muraro as Doctor Bartolo, Margaret Lattimore as Marcellina, John Graham-Hall debuting at the Met as Don Basillio, Tony Stevensen as Don Curzio, and Ashley Emerson as Barbarina) added strong renditions of their roles to fill out a satisfying evening.

Conductor David Robertson and Pianist Dan Saunders were splendid in accompanying the cast. A piano in a Mozart opera nowadays seems strange and out of place, but it was far from bothersome on this evening. In many ways, the wholesome sound of the piano gave the dry recitativo energy often lacking in sound of the harpsichord.

Robertson’s conducting was swift and often understated. He was extremely supportive of his singers, best exhibited during Kovalevska’s tempo difficulties in which he adjusted with facility and de-emphasized the problem.

This Nozze is the latest in a series of successful revivals. Thus far this season the Met has successfully revived Carmen, and Il Trovatore  to tremendous success without the need for a flashy cast. Add Nozze to that list.