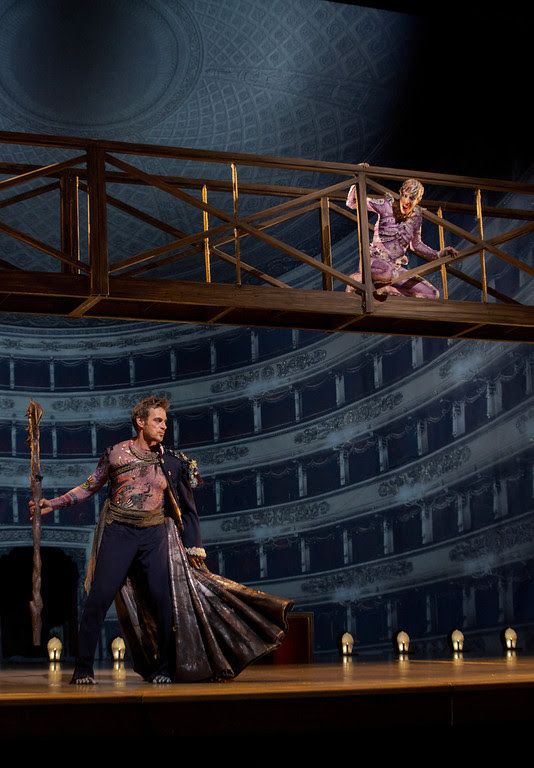 Shakespeare has been the subject of many composers' masterpieces from Verdi with Macbeth, Otello, Falstaff, Rossini with Otello, Britten with Midsummer Night's Dream and Wagner with Measure for Measure (one of his earlier operas). In 2004 Thomas Ades joined this circle with an adaptation of The Tempest, Shakespeare's 1611 play. Meredith Oakes adapted the work and according to Ades used modern English to be all the more faithful and concentrate on the drama. The work tells the story of Prospero who has been exiled from Naples by his brother Antonio and seeks revenge.

According to Ades, he set the music to be faithful and sought to give each character a different palette of music in order to fully flesh the multi-faced aspects of the drama. While I don't mean to criticize his score because it has lots of merit, the music did not do much for me. Going into the opera I knew the music was difficult to follow and could get a little austere at times. However I thought that seeing it live would be a better experience than on recording. The result was the opposite. Ades' score never really builds and while it has some ravishing moments such as the opening Storm (a tumult of strings and winds that creates the effect of unbridled fury) and the Miranda and Ferdinand duet at the end of act two (which builds to ecstasy with the strings and winds crescendo to one of the more memorable melodies), The Tempest's music is rather bland and forgettable. I commend Ades for giving each character a specific type of music. For example the spirit Ariel is characterized through her high tessitura and eeriness in color. Ariel never descends from high D's, E's, F's and even G's and has some of the more energetic music in the work. Prospero on the other hand never has any sort of melody and music is characterized by the gruff orchestration. The two lovers Miranda and Ferdinand get the most romantic music with some lush melodies and the most legato singing. All these features enhance the score but the biggest problem is that you never really feel a climatic moment in the opera as the music becomes monotonous by the end of the work and the audience is never given an opportunity to feel the cathartic moments that Prospero or any of the characters feel.


Thankfully the Met has succeeded in bringing an engaging production by Robert Lepage. Over the past year,  Lepage has been criticized for his style over substance and his lack of direction (See the Gotterdammerung and Siegfried Reviews). However this year he has put together a production full of beautiful imagery and insight. Lepage has set the work in the 19th century La Scala theater as he stated that in the 19th century the legendary theater was a magical place and that the work would have a timeliness to it. I didn't really feel like I was watching La Scala, but it made no difference in the overall effect of the production. Each set is meticulously constructed and allows Lepage to play with video projections, and also giving the performers enough space to work around. The opening storm is displayed with Ariel hanging onto a chandelier and spinning it to create the effect of winds. The ship on stage right is a small miniature that slides off the stage as a large sheet of water spins on stage to create the ocean. The characters pop out of the curtain to portray them struggling in the ocean. It is truly an incredible sequence which is just the start to a technically profound night. The entirety of the first act takes place with the stage facing out into the audience. Ariel's entrance comes from the pulley's backstage. The genius of this choice is that it basically emphasizes that she is part of the backstage workings of Prospero's plot and that no one onstage (the players being manipulated)  can see her. Act two is set on the stage with the depiction of water while act three is set in the backstage with the end in the hall. Some outstanding motifs include the fact that Prospero is always on the stage as the director of the proceedings controlling and watching over every action that occurs throughout the work. The Final Act shows a profile of the audience and the stage, a sort of fusion of the two. It marries the staging to the marriage as the reconciliation occurs during this act between Prospero and his enemies. 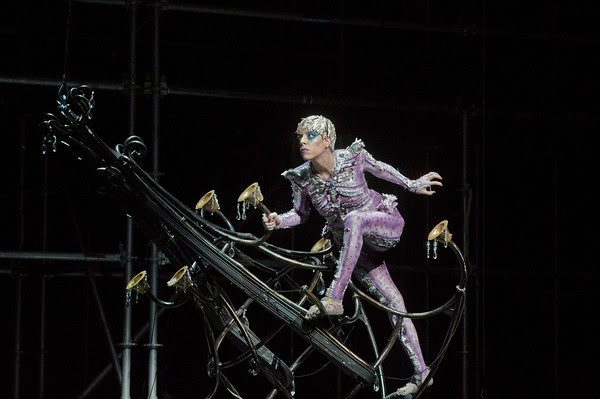 The cast on this night was strong with Simon Keenlyside leading the way. The role as it was written for him in 2004 and he sang on this night with with power. He was able to encapsulate the fury but as the work progressed, his voice took on a lighter complexion to mirror Prospero's softening. Isabel Leonard showed off her lush voice and unveiled her surprising high register. Her Miranda was gentle and highly alluring in her simplicity. Alek Shrader sang Ferdinand with beautiful colors and controlled phrases. His high notes were a bit strained at the beginning of the work but he warmed up to it. However his voice may have been a bit small for the work and I wished he would have been cast in the opening night of L'Elisir d'Amore instead. Alan Oke as Caliban started with an arid voice but eventually also warmed up and sang this fairly comic-tragic role with conviction and dignity. His shining moment was a breathtaking passage on the spirits invading his dreams. A pure legato was on full display here. Audrey Luna sang the fiendishly difficult music of Ariel with gorgeous tone. It is a shame that she has to sing most of the music in such an uncomfortable range because at times her vocal lines were piercing. She was also barely comprehensible in the upper range. William Burden and Toby Spence also provided some beautiful singing with their light lyric voices.

Its hard to talk about the conducting as I don't know this score well but from what I heard Thomas Ades' led a spirited performance with the orchestra sounding at it's best.

I wish I could have enjoyed this performance more but it was hard when the music did not live up to the work it's based on. While it may not be a lot of audience member's or my cup of tea it is something to check out if only for the strong cast and brilliant production.