Jonathon Miller's production of Le Nozze di Figaro gets a starry cast led by Ildar Abdrazakov in the role of Figaro and Gerald Finley as the Count.

The Production
The current production of Le Nozze di Figaro returns to the Met after a 3 year absence. The production by Johnathon Miller had its premiere in 1998 and was immediately recorded on live television. Jonathon Miller who made his Met debut in 1991 directing Kata Kabanova and is known for his straight forward approaches to Opera. Sometimes he tinkers with relationships and settings but with this opera he sticks to the basics. For this production he keeps the work in the 18th century and lets the score tell the tale Mozart’s way. For the last run in 2009, Gregory Keller oversaw the stage direction and changed some scenes from their original staging. For example Figaro now sings “Se vuol ballare” while spit-polishing the Count’s boots and Cherubino no longer disrobes behind the Countess’s screen. According to critics, the balance of subtlety and slapstick were moved slightly toward comic broadness.As for the production's sets and lighting, Miller clearly designed it with with sensitivity to both the time span and the highly stylized fashions of the day. For example Miller used bright lights in Acts I and II to denote day time, and warm candle light with dark filter of blue light for Acts III and IV. While the staging isn't the most evolutionary production to come to the Met, audiences have loved it for years and this year with its exciting cast should not be an exception.

Ildar Abdrazkov sings his second Mozart role at the Met. The Russian Bass made his Met debut in 2004 as Massetto in Don Giovanni. He was praised for his Robust voice and charisma. Since then Abdrazakov has been heard in the French, Bel-Canto and Russian repertoire as well as on two HD performances that have fascinated audiences around the world. With a wide variety of repertoire Abdrazkov's acting and singing has matured to the status of the greats in history. Last year he was praised for his role debut as Dosifei in Khovanschina for his aristocratic polish and his prayer-like phrases. He was characterized as a magnetic pole on stage. Without a doubt Abdrazkov should be an appealing and charismatic Figaro. Mojca Erdmann made her anticipated Met debut last year in the role of Zerlina to great reviews. Erdmann came to great appeal in Europe before her debut and in 2010 signed an exclusive contract with Deustche Grammophon. Her first album "Mozart's Garden", took audiences by storm showing her expertise in the classical repertoire.  Erdmann who specializes in Mozart made an appealing Met debut as critics commented on her delicacy and her charm. She immediately became a star to anticipate every year at the Met. This year Erdmann will sing the role of Susanna, a role which should be perfect for her given the star quality she gave to Zerlina and the ease and sweetness in her voice. Her agility as an actress should also give new life and insight into the role. The role will also find her in her first starring role and will be a test to see if the great promise she showed last year comes to fruition. Maija Kovalevska returns to the Met in her Met role debut as the Countess Rosina. Kovalevska, who made her Met debut in the role of Mimi in La Boheme in 2006, has never been an artist who has appealed to me. It is perhaps because through her 46 performances with the company she has repeatedly performed Micaela in Carmen and Mimi with a couple Euridices and Lius for good measure. The point is that after seeing her in two performances of these roles I have always found her generic and uninteresting. However this year I am very excited to see her in this role as she leaves her routine comfort zone and finally gets to explore new repertoire with the company. Kovalevska, best known for her Mimi, has been praised for her bright color and her expressive power. Having seen Kovalevska I know she excels as an actress and with her new colleagues and new role I believe that Kovalevska will be able to bring out new qualities in her artistry that audiences have yet to see. Hei Kyung Hong returns to her acclaimed portrayal of the Countess for two performances. Hong has been one the greatest assets the Met has since her debut as Servillia in La Clemenza di Tito in 1984. Since her debut she had leading roles in many productions and while never a superstar she was always given leading roles. In 2007 after the death of her husband Hong took some time away from her career. She returned eventually, but only as a cover, singing a few performances filling in for leading divas. It was not until 2011 when she stepped in for Angela Gehroghiu in Romeo et Juliete that management saw her qualities again. She was immediately given performances of La Boheme and although she covered La Traviata she was ultimately the star of the run as she opened the run to ecstatic reviews and filled in the last show. At the age of 53 Ms.Hong maintains one of the best techniques in the industry. As the Countess she has been praised for warmth and delicacy. In her last performances of the role in 2007 the New York Times stated that she made her "character warmer and more vulnerable here than in past appearances, and her “Dove sono” was as wrenching, but also as dignified, as it needs to be."  It should be a pleasure to see this artist reprise the role.

Gerald Finley adds his third Mozart role to his small but substantial repertoire at the Met. Since his Met debut as Papageno in Die Zauberflaute in 1998 Finely has never been a mainstay at the Met. He went three years without appearing and it is only until recently that he is appearing more often with the company. Best known for his interpretation in Dr. Atomic, Finely has made a career singing repertoire by Mozart, Puccini and Verdi. This year Finely adds the Count one of his signature roles to the repertoire. He has already sung the role around the world, most notably in London where his interpretation was recorded for DVD. Reviews from that production stated that Gerald Finley was a fine Count and that he made for one of the most "Dangerous." They also stated that he was "aggressive and insidiously attractive". Of his voice they stated that he is assertive and outstanding. While singing Don Giovanni at the Met over the spring I had the opportunity to speak briefly with Finley and he stated that he was looking forward to Le Nozze di Figaro production because he was not familiar with his colleagues and he found it exciting to collaborate with new people. Coloratura Soprano Christine Schafer makes her Met role debut as Cherubino. Since her Met debut in 2001 in the title role of Lulu Met audiences have only had the opportunity of seeing her 24 times. While her repertoire is varied, shockingly she has made a striking impression as Cherubino, a role that is sung mostly by Mezzo sopranos. Her interpretation has already been immortalized with two DVDs one from Salzburg and the other from Paris. Of her Cherubino critics have marveled over her superb voice and her convincing teenage acting.

David Robertson reuturns to Mozart after his acclaimed Billy Budd. Robertson is best known for having made his Met debut in the premiere of The Makropulos Case, a premiere that was cancelled because of Richard Versalle's untimely death. While he comes infrequently to the Met, Robertson has returned various times and has led the orchestra to great acclaim. As a conductor, he is engrossing and emphasizes different colors in each instrument in the Orchestra. Last year when conducted Billy Budd he was prasied for his well paced and textured reading. Critics also commented on his energy and precision making the evening more engrossing. 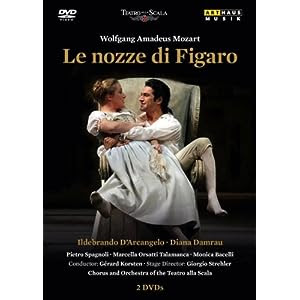 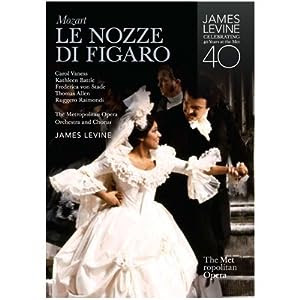 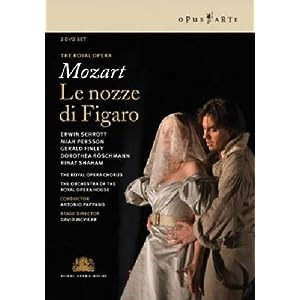 The following are some of my favorite interpretations of the work. For those who have never heard the work or are just looking for some to see in preparation I recommend these  versions. The one on the left represents Gerald Finley's acclaimed interpretation from the Royal Opera House featuring an all star cast that includes Erwin Schrott, Miah Perrson and Dorthea Roschmann. The middle DVD from the Teatro alla Scala features Diana Damrau and Ildebrando D'Arcaneglo in one of the most delightful interpretations on the market. Finally the Metropolitan Opera offers a Figaro with Ruggero Raimondi, Kathleen Battle, Carol Vaness, Federica Von Stade and Thomas Allen. The production by Jean Pierre Ponelle is one of the classics in the history of the opera.
Posted by Unknown at 2:08 PM